Kiffer Card is a Research Assistant in the BC-CfE’s Epidemiology and Population Health program, working on the Momentum Health Study. The study looks to gain insight on the sexual health of gay, bisexual and other men who have sex with men within Greater Vancouver. Momentum aims to report new estimates of HIV prevalence among men who have sex with men (MSM) in the region. Messages around HIV treatment and prevention have been updated in BC on an ongoing basis. The Momentum Study aims to know more about how men are responding to such shifts. It will be the first to use respondent-driven sampling (RDS) to obtain a representative sample of MSM reflective of the ethno-cultural diversity of Greater Vancouver. In fact, it's the largest study of its kind in Canada, and the first completed study in Canada using RDS with MSM. Momentum has one of the largest MSM samples recruited using RDS in North America.

The BC-CfE spoke with him about his career path and his research.

1. Tell me a bit about yourself.

I was born and raised near Las Vegas, Nevada. I say "near" because we actually lived in the shadow of the Las Vegas lights, in the quiet suburb of Henderson. I majored in Political Science at the University of Las Vegas. I was also serving as the first freshman member of the student body's judicial branch, worked as a peer advisor, and served on the university's Student Organization Board, which determined funding for the various student groups. Working at the university was the first time I met anyone who was gay (like me, although I was in the closet). There were "safe space" symbols all over. It was good to experience, good to feel safe, but not safe enough to come out of the closet.

I then attended Brigham Young University (BYU) as an undergraduate and studied Anthropology, Economics, Microbiology, and finally landed on Epidemiology. It took me three or four tries to find a major that I felt was going to add structure to my life’s work. At this same time, I was too afraid to come out to anyone (as the university forbade same-sex relationships or interactions of any kind), which added a lot of stress as I tried to picture my future life. 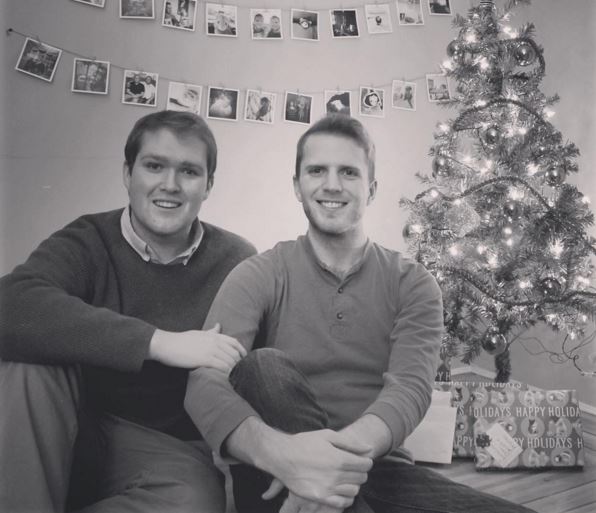 I was taking a Chronic Health Class and chose HIV as a chronic disease to write an in-depth literature review on. For the first time, I was really exposed to the idea of internalized homophobia and all the baggage gay oppression brings. At about the same time, a group of BYU students made some YouTube videos about their experience being gay and Mormon at the school. A researcher had just published on stigma and its effects among gay Mormons. All of this together finally gave me the courage to stand up for myself and to come out to my closest family and friends. It was a huge relief.

Eventually I started dating and met my partner, Kirk. After about a year of dating we came here, to Vancouver, on vacation and instantly decided we wanted to move here to attend graduate school. When I was accepted to work with Dr. Bob Hogg at the BC-CfE, I knew it was an opportunity I couldn't pass up. So here I am today, in Vancouver working with some very amazing researchers!

2. Could you tell me how you became interested in working in the field of HIV research?

HIV research is a matter of justice: it’s a matter of righting the trajectory that led the epidemic to become so dire. I love HIV research because it is about correcting stigma, standing up for people who are stigmatized and trying to make things right. But it’s also about challenging ourselves in thinking about the ethics of public health. We consider the many different impacts of every public health message. I think HIV research is challenging because we are balancing curbing disease transmission with human and social elements. That challenge is what makes it so exciting

3. What do you do at the BC-CfE? Could you tell me more about your research?

So far, my research here has mostly focused on two areas. First, my thesis aims to better understand the role of community connectedness and the Internet in the lives of men who have sex with men (and in the epidemic overall.) Personally, I wasn't really shaped by the gay community. I think, in a way, my research interest in this area is an attempt to recapture that lost experience of being part of the community. I also met my partner online through Tinder. My focus on social networking and Internet technologies is part of a bigger quest to contextualize my life experience.

My second area of research focuses on how gay and bisexual men adapt their sexual behaviour based on their or their partner’s known or perceived HIV status, in order to reduce risk of transmission. I've always been interested in risk reduction and how these strategies develop either organically or culturally. The emergence of these seroadaptive strategies (and biomedical interventions for that matter) speaks to the need for continued prevention that is realistic - that acknowledges the complex and dynamic decisionmaking processes surrounding each and every sexual encounter.

4. What inspires you about the work at the BC-CfE?

It's not working at the BC-CfE that inspires me, it's working with thoughtful and brilliant people from so many different backgrounds, who have so many different insights and perspectives. I think the BC-CfE’s power lies in collaboration. It's such a great opportunity to be so connected to people committed to making an impact on something that matters for so many. It's really fantastic to be part of an organization working to shape HIV policy worldwide.

5. What do you hope that your work here accomplishes?

That's the question, isn't it! I think we all want to say that our work - this manuscript, this conference presentation - is going to revolutionize HIV research. My hope is perhaps somebody will read something I've helped write, and maybe it will help to complicate their thinking and bring in a tiny bit of nuance. Maybe eventually one of my little ideas will be part of someone’s big idea that changes how we respond to those in need.