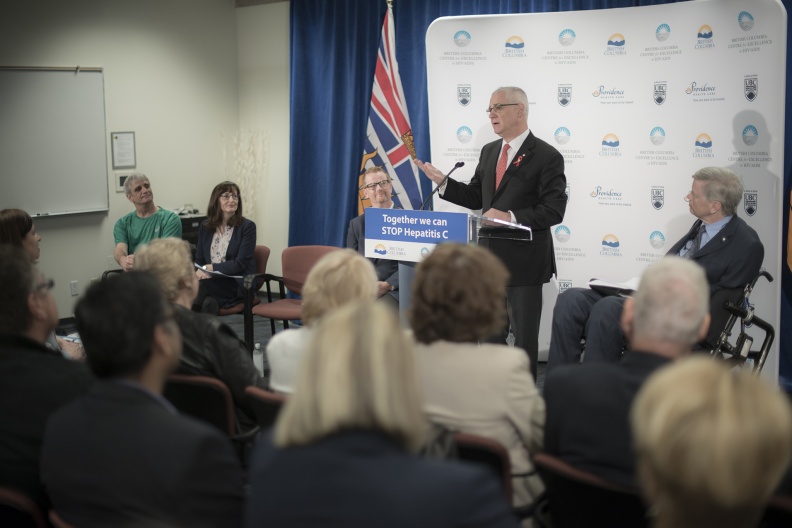 In April, the BC Minister of Health Terry Lake announced $5 million in funding to help curb the province's hepatitis C epidemic. The funding will go towards research towards improving treatment outcomes. The research will focus on individuals in Vancouver who have been successfully cured of hepatitis C, but who have been identified as at increased risk of re-infection. It will also evaluate the impact and outcomes of current hepatitis C treatments, and identify the next steps required to optimize treatment outcomes in BC.

Dr. Montaner here lends his insight on some of the key aspects to know about hepatitis C for your own health, and how it can be eliminated through a Targeted Disease Elimination approach to improve the province's health care sustainability.

BC-CFE: Who is most likely to get hep C?

Dr. Julio Montaner: Hepatitis C can affect anyone, however the vast majority of those living with the disease in North America are baby boomers (born between 1945 and 1965). As they age, untreated HCV is presenting a critical health priority. The US Centers for Disease Control and Prevention (US CDC) recently released a study finding deaths from HCV have outpaced deaths from all other reportable infectious diseases combined, including HIV, pneumococcal disease and tuberculosis (TB).

BC-CfE: Why is hepatitis C such an important health issue?

Dr. Montaner: The hepatitis C virus (HCV) epidemic remains one of the major infectious health challenges of our time. Across Canada there are more than 240,000 living with the hepatitis C virus (HCV), of which 44% are unaware. It is estimated up to 80,000 people are living with HCV in British Columbia. Worldwide there are an estimated 10 million people who are living with both HIV and HCV, including 13,000 to 15,000 in Canada.

BC-CfE: Why is it important to get tested? And are there certain factors keeping some people from being tested?

Dr. Montaner: Testing is very important because, left untreated, hepatitis C will typically lead to symptomatic and serious disease. A small proportion of people infected with HCV go on to naturally eliminate the virus, and do not have chronic HCV infection or HCV-related liver disease. Most HCV infected individuals go on to develop chronic HCV infection, which after a few decades (two to six) becomes symptomatic. Eventually, HCV can evolve into one or more of chronic hepatitis, liver cirrhosis, liver failure, esophageal varices, and hepatocellular carcinoma, which can be highly debilitating and ultimately fatal. HCV is the leading cause of liver transplants in Canada.

BC-CfE: What happens after testing?

Dr. Julio Montaner: Once HCV infection is identified through testing, patients are counselled regarding preventing transmission (using universal protection for blood and body fluids). Next they are counselled regarding avoidance of alcohol and drugs, as means to slow the progression of hepatic disease. Finally, patients should be evaluated regarding eligibility for HCV treatment, which can be effective (indeed curative) in the vast majority of cases within 12 to 24 weeks of treatment.

BC-CfE: What led to such high rates of HCV among the baby boomer demographic? How can these high rates be addressed?

BC-CfE: This could cause a major burden on the sustainability of the health care system. What is the BC-CfE doing to address this issue?

Dr. Montaner: The good news is there are several curative therapies for HCV. Newer treatments, called DAAs or direct acting antivirals, usually clear the virus within an eight- to twelve-week treatment course with very few side effects.

This opens the door for us to evaluate the potential impact of an HCV control strategy modelled after the HIV Treatment as Prevention strategy, pioneered at the BC-CfE, which has been successful in significantly reducing the number of AIDS cases and new HIV cases in the province. The BC government supported a TasP approach to address HIV through the implementation of the STOP HIV/AIDS program.

The success of TasP paved the way to a $5 million investment from the BC Ministry of Health to 1) monitor and evaluate the overall impact of the ongoing roll-out of HCV therapy in BC, and 2) to establish a prospective research cohort of individuals successfully treated for HCV, to characterize HCV reinfection rates among populations at increased risk of reinfection (e.g., people who inject drugs, people living with HIV, men who have sex with men, etc.) and to determine the threshold of risk reduction engagement necessary to minimize the likelihood of HCV re-infection.

We will carry this exciting new research program in collaboration with Dr. Mel Krajden from the BC Centre for Disease Control, Vancouver Coastal Health, public health and community partners.

BC-CfE: Sounds like we have a path forward. Do we have the tools to end this epidemic once and for all?

Dr. Montaner: Yes, we do have the tools with the current medications. Our strategy should be to reach out to the key populations, engage and sustain them in care and treatment, and monitor their wellbeing. I believe if we do this we will significantly reduce the cases of hepatitis C and prevent reinfections.

Beyond the provision of medical treatment there are additional considerations. A comprehensive scope of treatment for particular populations must include wrap-around services to prevent HCV re-infection. We will focus on the interrelated health issues of HCV, addiction, and HIV. Our Hope to Health Clinic in Vancouver’s Downtown Eastside, with support from the BC Government, will serve as the headquarters for the initiative.

Fortunately, we have come a long way in better understanding how to improve the health of people who use drugs. Years of scientific studies have shown a punitive approach to drug use is not working. Harm reduction, including needle exchanges and supervised injection facilities, is the way forward for developing trusting relationships, providing opportunities for engagement into care and for preventing the spread of illness.

The global community is increasingly adopting this frame of mind. Recently, the Canadian government declared harm reduction to be an important priority drug policy. We are looking forward to this transformational period in policymaking in Canada. A people-centred, evidence-based approach will have positive impact on the health and wellness of many thousands of people in Canada. It should also provide much needed lessons that will have impact abroad, as we move towards a world free of HCV.