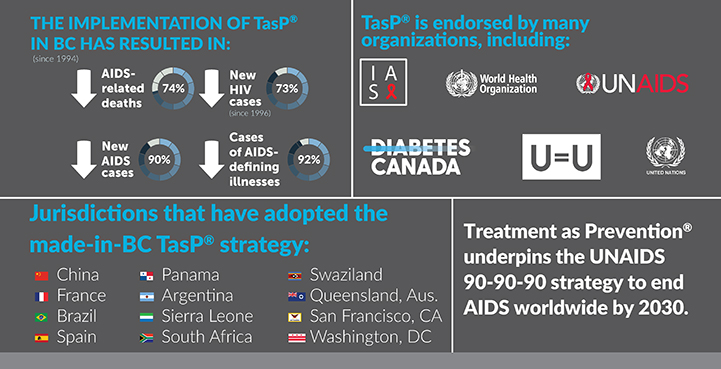 Three major international HIV trials based in several African countries investigated the impact of expanded access to HIV testing and treatment, under a Treatment as Prevention (TasP) approach. Pioneered by the BC Centre for Excellence in HIV/AIDS (BC-CfE) and first introduced to the world in a 2006 Lancet paper, the TasP strategy entails providing earlier access to HIV testing and immediate, supported and universal access to antiretroviral treatment (ART).

In British Columbia, TasP has been implemented with support from the provincial government, leading to a decrease in AIDS-related mortality alongside a steady, significant decrease in new HIV cases.

The African-based studies analyzed how the TasP or "test and treat" approach works in resource-limited settings, with positive results: all studies reported a reduced incidence of HIV by approximately 30%.

These encouraging outcomes add to a growing tower of international data showing, with health supports in place, TasP works in improving health outcomes and curbing HIV. With a collective sample size of nearly 1.5 million people, this research amplifies the need to invest in broader access to HIV testing and treatment to reach the goal of ending AIDS as a global pandemic. The UNAIDS 90-90-90 Target aims to have 90% of individuals living with HIV diagnosed, 90% of those diagnosed on treatment, and 90% of those on treatment virally suppressed by 2020.

According to the World Health Organization, as of 2018, there are 25.7 million people living with HIV in Africa, the largest number by global region. The continent saw an estimated 1.1 million new HIV cases in 2018.

By the end of the three-year PopART study based in Zambia and South Africa, the UNAIDS 90-90-90 target of achieving 73% viral suppression was surpassed (approximately 75% viral suppression). The Ya Tse study, based in 30 villages in Botswana, found ramping up community HIV testing and providing immediate ART effectively increased rates of viral suppression. This included home-based and mobile testing, appointment text-message reminders and active follow-up for "no shows", and universal access to ART starting from the first clinic visit.

The SEARCH study, in 32 communities within the Eastern African countries of Uganda and Kenya, included HIV testing within other disease prevention campaigns as a tactic towards improving community health. Interventions included annual community health campaigns and partnering with local communities to deliver patient-centred care for common diseases. Health interventions improved rates of HIV viral suppression while simultaneously bettering other health outcomes, such as reducing the risk of death from tuberculosis and hypertension rates among adults (both by 20%).

These encouraging outcomes offer subtleties to be emphasized—such as the essential contribution of outreach, human connection, community involvement, and avoiding stigmatization and discrimination. Even small steps, such as sending reminders for HIV treatment appointments, can make a big difference. The findings also highlight the need for universal access to health care and treatment coverage, extended at the earliest possible point to all members of a community regardless of citizenship. These principles can also potentially be applied to other infectious diseases, and diseases with a social contagion component—including viral hepatitis, type 2 diabetes, asthma, and COPD. 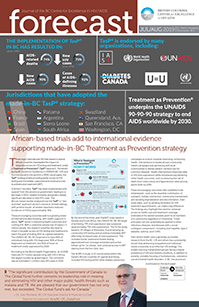 Even where health care is generally accessible, research from the BC-CfE and others has consistently shown that addressing inequalities and individual needs is essential to an effective HIV strategy. This entails reaching marginalized groups facing a higher prevalence of HIV and related conditions, in addition to poverty, unstable housing or homelessness, substance use and mental health disorders. In BC, the province's Seek and Treat for Optimal Prevention of HIV/AIDS (STOP HIV/AIDS) program aims to engage vulnerable populations with difficulties in accessing traditional health services.

Of note, PrEP (pre-exposure prophylaxis) was not included as a health intervention in any of the three African-based trials. The HIV prevention medication has now been recognized as a valuable addition to the TasP strategy. Furthermore, identifying clusters of transmission through phylogenetics could provide missing information on ongoing HIV transmission. Tracking the genetic evolution of HIV can provide specific clues on where to target prevention and health services. Currently, the BC-CfE is leading a groundbreaking program to identify HIV clusters across five Canadian provinces.

Overall, the research from all three trials further validates and underlines the feasibility of the UN
90-90-90 Target—calling for continued investment towards universal access to HIV treatment. In 2018, 1.7 million people were newly infected with HIV. Today, 23.3 million people are accessing ART. Global targets are for 33 million people to be on ART by 2030 and getting there will require a sharp uptick in the current trajectory.

At the International AIDS Society Conference in Mexico City in July, leading experts from around the world met to discuss global progress in the field of the proven-effective, made-in-BC TasP strategy. The BC-CfE first hosted the HIV TasP workshop in 2011 and, since 2017, the International Association of Providers of AIDS Care (IAPAC) has taken the mantle—helping to continue our forward momentum toward attaining decisive, measurable targets towards eliminating HIV. On the occasion of the last meeting IAPAC President and CEO Jose Zuniga said: "I extend my deepest gratitude to the BC-CfE's Dr. Julio Montaner for entrusting IAPAC with the responsibility to shine a light on and report progress annually at country and municipal levels towards the UNAIDS 90-90-90 targets."

As we spotlight the most recent research, we extend gratitude towards scientists worldwide who are continuing to build evidence supporting the TasP strategy. In the absence of a vaccine or a cure, TasP is the most effective means for stopping HIV, and has been shown to work across a range of settings and environments. We call for political leaders to invest in expanding access to HIV testing and treatment, and to actively resist the plateauing of funding and stalling of forward progress on the global HIV/AIDS epidemic.