The BC Centre for Excellence in HIV/AIDS (BC-CfE) has signed a Memorandum of Understanding (MOU) that will see Queensland, Australia, embrace the made-in-B.C. HIV Treatment as Prevention (TasP) strategy.

BC-CfE, the Government of Queensland and HIV Foundation Queensland (HIVFQ) signed the agreement at the 20th International AIDS Conference in Melbourne. The partnership formalizes a collaboration aimed at supporting HIV positive individuals and at-risk populations in Queensland and B.C. The Australian state will formally adopt TasP, a strategy pioneered by the BC-CfE. 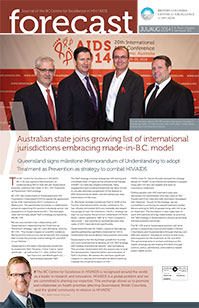 “We are very excited to be collaborating with Queensland in implementing the Treatment as Prevention strategy,” says Dr. Julio Montaner, director, BC-CfE. “This model is based on scientific evidence. We know from the success we’ve had with this strategy that it holds the promise of eliminating HIV and AIDS in our lifetime.”

Queensland is the latest international jurisdiction to implement TasP. Panama, China, France, Spain and Brazil – as well as the U.S. cities of New York, San Francisco and Washington D.C. – have already adopted TasP.

The TasP strategy involves widespread HIV testing and immediate offer of highly active antiretroviral therapy (HAART) to medically eligible individuals. Early engagement and sustained treatment has been shown to virtually eliminate progression of the disease to AIDS and premature death, and simultaneously stop transmission of the virus.

Dr. Montaner formally introduced TasP in 2006 at the Toronto International AIDS Society conference. B.C. has virtually eliminated AIDS and markedly decreased the spread of new HIV infections. The B.C. strategy has been so successful, the province’s dedicated HIV/AIDS Ward -- which opened in 1997 at St. Paul’s hospital in Vancouver -- was recently re-profiled because new cases of AIDS have declined significantly.

Queensland Minister for Health, Lawrence Springborg, said the partnership signified a milestone for HIV in Queensland that would deliver many positive outcomes.

“Queensland is the first Australian jurisdiction to enter into such a partnership to develop an HIV Treatment as Prevention strategy with leading international experts,” said Sprinborg. “This provides Queensland with the opportunity to lead the development, implementation and evaluation of TasP in Australia. We believe this will have significant impacts on national and international efforts working towards the virtual elimination of HIV.”

HIVFQ chair Dr. Darren Russell stressed the strategy allows for HAART to be offered immediately to people living with HIV who are eligible and want to commence treatment.

“Getting people onto HIV treatment early also decreases HIV transmission and new cases of HIV,” Russell said in an interview with Australian newspaper Star Observer. “As part of the strategy, we are committed to achieving increased treatment uptake. We are aiming for 90% of people living with HIV to be on treatment. The foundation is also really keen to work with partners and key stakeholders to promote the TasP strategy in Queensland to ensure we achieve the best possible outcomes.”

The BC-CfE and its Queensland partners will work jointly to respectively improve the health of British Columbians and Queenslanders through sharing cost-effective research, therapeutic protocols and tools, and programs for the treatment of HIV and AIDS. The partnership aims to protect and improve the health of people by eliminating HIV/AIDS through science, policy, partnership, and evidence-based public health action.