BC Centre for Excellence in HIV/AIDS invites the “Berlin Patient”, the first person to be cured of HIV, to Vancouver 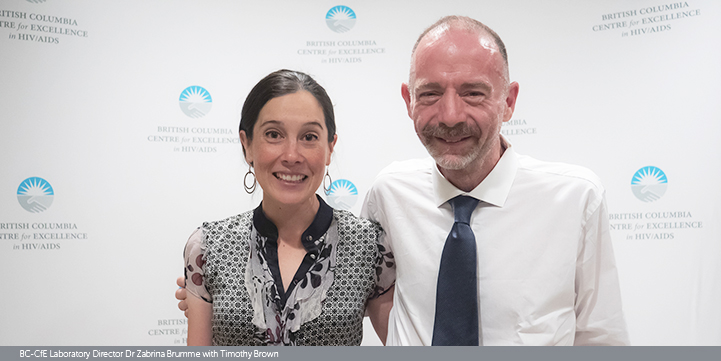 "It's extraordinary story," begins Dr. Zabrina Brumme, Laboratory Director at the BC Centre for Excellence in HIV/AIDS (BC-CfE) and Professor of Health Sciences at SFU.

Timothy Brown, known worldwide as the "Berlin patient" and the first person to be cured of HIV, was introduced by Dr. Brumme to a conference room in Vancouver. Attendees included community members, researchers, scientists, healthcare workers, post-doctoral fellows, and media. Dr. Brumme kickstarted Brown's talk with an overview of the science and the possibilities for an HIV cure. She emphasized while Brown's cure is inspiring, it is not a safe, scalable solution for people living with HIV around the world. However, Dr. Brumme pointed out, hearing the personal stories of people impacted by HIV, create opportunities for scientists and those with lived experience to come together in dialogue to move closer to an HIV cure.

Timothy Brown was born and raised in Seattle and moved to Europe in 1991 when he was 25 years old. He settled in Barcelona and decided to study in Europe, where he found getting an education was affordable. Timothy quickly adapted to his new home and developed an active social life, meeting and working with people from all over the world.

At this stage of his life, Brown says his idea of safe sex "was not safe at all". One of his partners, who was living with HIV, recommended Timothy get tested – he tested positive. Brown says the news stunned and upset him and he struggled to share his new status, especially with his family. Doctors put him on anti-retroviral medication, AZT (azidothymidine) as treatment, initially starting him on a low dose.

"Basically, I forgot I was HIV positive," he says. He went for a checkup once a month and took his medication regularly but went on to resume his work and social life. Brown met someone who was also living with HIV and entered a long-term relationship. 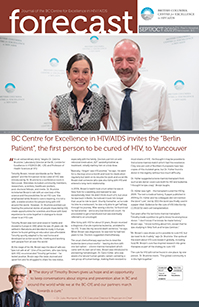 In 2006, Brown's health took a turn when he was in New York for a wedding and realized he was exceptionally tired. He didn't think much of it, but once he was back in Berlin, he noticed it took him longer than usual to ride to work. Shortly thereafter, as he rode his bike to a restaurant, he was only able to get halfway through his journey. After seeing a doctor, he found out he had anemia – and a very low blood cell count. He proceeded to get a transfusion but was eventually referred to an oncologist.

After living with HIV for about 10 years, Brown received a diagnosis of acute myeloma leukemia, unrelated to his HIV. "It was like my second death sentence," he says. When Brown was diagnosed, he was told he had two years to live. Doctors suggested chemotherapy.

The usual chemotherapy approaches to treat the leukemia were unsuccessful – leaving doctors with one last option – a bone marrow transplant which came with its own set of risks. Brown was introduced to pioneering hematologist, Dr. Gero Hütter, who was aware of a natural human genetic variant carried by a rare group of human beings, making them resistant to most strains of HIV. He thought it may be possible to find a bone marrow match which had this resistance. Only one per cent of Northern Europeans have two copies of this mutated gene, but Dr. Hütter found a donor in the registry without too much difficulty.

Dr. Hütter suggested a bone marrow transplant from such a rare donor could cure both his HIV and leukemia. "I thought he was crazy", Brown laughs.

Dr. Hütter was right – the transplant cured the HIV by 2009. The rest is medical history. A paper published in 2009 by Dr. Hütter and his colleagues did not mention the word "cure", but by 2011 the word was finally used in a paper titled: Evidence for the cure of HIV infection by CCR532/32 stem cell transplantation.

Two years after the last bone marrow transplant, Timothy made a petition to get to know his anonymous donor. "I don't know if he knows he made history," Brown says. "I know nothing about him, except that he was studying in New York and he was German."

"Mr. Brown's case shows us it is possible to cure HIV, but we need to do it safely," says Dr. Brumme. She spoke at the event about HIV cure research globally, including how Mr. Brown's cure has inspired research into gene therapies as part of the strategy to cure HIV.

The cure for HIV will not be found in one place, by one person, Dr. Brumme insists. "The global community is in this fight together."