On January 17th, the BC-CfE announced the launch of a provincewide initiative, supported by a funding grant from Health Canada's Substance Use and Addiction Program. The first-of-its-kind initiative based on the BC-CfE's world-renowned Treatment as Prevention (TasP) strategy to curb HIV and AIDS—will roll out across all BC regional health authorities in early 2019.

This initiative is building upon the successful foundation of a pilot project between the BC-CfE and Vancouver Coastal Health (VCH). The BOOST (Best Practices in Oral Opioid AgoniSt Therapy) Collaborative introduced a proactive model of treatment for opioid use disorder (OUD) to VCH clients at risk of overdose. Health care teams across Vancouver worked to implement system changes to effectively identify, diagnose and engage over 1,100 people in care for OUD—doubling those kept on lifesaving treatment at three months.

Through the Collaborative, health care teams created and implemented processes to better reach out to clients (for example, increasing follow-up calls and streamlining client intakes). These incremental changes are providing a path forward to help address the needs of those living with opioid use disorder. The initiative launches in the midst of the ongoing opioid drug overdose crisis, which the Government of BC declared a public emergency in 2016. There have been more than 3,800 confirmed deaths to illicit drug overdose in B.C. since January 1, 2016.

"The BC-CfE applied lessons from its proven effective HIV strategy, which drove a steady and consistent decline in HIV and AIDS, to address the urgent opioid overdose crisis affecting individuals and families provincewide," said Dr. Rolando Barrios, Senior Medical Director, BC-CfE. "Small-scale improvements in care, implemented through the work of VCH health care teams, created major, positive impacts on the lives of those affected by opioid use disorder. We can now apply these concepts to every region in BC."

Among VCH clinics participating in the BOOST Collaborative, the number of individuals retained in opioid agonist treatment (OAT) at the 90-day mark increased from three out of ten to seven out of ten—a very significant leap in improving access to regular, long-term care for opioid use disorder.

"I am extremely proud of the work of the VCH health care teams in successfully engaging with clients to improve their access to lifesaving opioid agonist therapy," said Dr. Patricia Daly, Chief Medical Health Officer and Vice President, Public Health, VCH. Dr. Daly is the Former Executive Lead of the Overdose Emergency Response Centre, established by the B.C. Government in 2017. 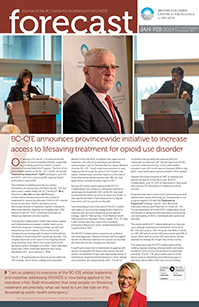 The BOOST Collaborative is based on an evidence-informed approach. Research shows that the biggest barriers to effective treatment for opioid use disorder are treatment access, dosage and retention.

A significant proportion of individuals struggling with opioid use disorder will reduce illicit opioid use and remain on treatment longer with appropriate doses of methadone, buprenorphine/naloxone or slow-release oral morphine (all categorized as OAT). The risk of morbidity and mortality decreases by 80% for individuals on effective OAT. Recent data from the BC Coroner's office found that, of the 1,800 deaths reviewed over a 19-month period (January 2016 to July 2017), none had buprenorphine present in their system.

Despite the known benefits of OAT, at baseline and before the launch of the Vancouver BOOST Collaborative, only 30-40% of individuals in Vancouver who started OAT remained on treatment at three months.

"Programs that help to meet clients where they are and address their needs effectively are fundamental to our progress against HIV with the Treatment as Prevention strategy," said Dr. Julio Montaner, Executive Director and Physician-in-Chief, BC-CfE. "The achievements of the BOOST Collaborative show the benefits in applying these principles to improving care and quality of life for individuals with opioid use disorder."

The newly launched BOOST Collaborative will be holding regular meetings among health care teams located at clinics across the province to share best practices. The BC-CfE will provide support as the teams work on identifying and addressing gaps in reaching clients within their own clinical settings