The fitting theme of AIDS 2020, the first fully-virtual International AIDS Conference, was Resilience. The theme reminded the global HIV community of its ability to come together despite a global pandemic to share our commitment to HIV prevention, treatment and cure research.

More than 180 countries participated in this year’s conference, held during the second week of July, and it featured more than 600 sessions and activities.

Among the major findings revealed during the conference was a pilot proof-of-concept study of what could be the first case of an adult with HIV to achieve long-term remission without a bone marrow transplant. On the topic of Treatment as Prevention, a study presented at the conference found cabotegravir for long-acting injectable PrEP is not only just as effective, but superior, to daily oral Truvada for HIV PrEP.

Meanwhile, UNAIDS Executive Director, Winnie Byanyima, and WHO Director-General, Dr Tedros Adhanom Ghebreyesus, presented virtually with both examining the link between the HIV and COVID-19 pandemics.

Thanks to research from the US and the UK, we know HIV does not increase the risk of getting COVID-19 nor does living with HIV increase chances of a COVID-19 death. In fact, a London study found COVID-19 patients living with HIV improved faster than HIV negative patients. However, other research presented at AIDS2020 found COVID-19 lockdown measures affected PrEP access, led to a sudden shift to rapid self-testing, and in some areas, interrupted or restricted access to antiretroviral treatment. Furthermore, we now know, thanks to a Spring survey of more than 13,000 people in 138 countries, how COVID-19 is negatively impacting the global LGBTQ2+ community.

Nearly half of those surveyed faced economic difficulty, with many unable to meet basic needs, skipping meals, or fearful of losing employment. 13% had already lost their jobs. Respondents also reported reduced access to safe injection equipment and opioid substitution therapy, something that threatens to undo global progress toward HIV prevention and treatment goals.

The BC-CfE was represented by five researchers at AIDS 2020. Our epidemiologist Martin St-Jean and his team’s presentation looked at the impact of drug overdoses on life expectancy among people living with HIV in BC and identified risk factors associated with increased overdose mortality. St-Jean’s team found survival gains from effective antiretroviral therapy being threatened by drug overdose deaths among people living with HIV. 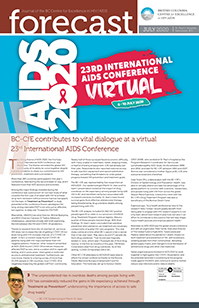 The BC-CfE analysis included 10,362 HIV-positive people aged 20 or older in our province’s HIV/AIDS Drug Treatment Program clinical registry. About a quarter of these people injected drugs. With their findings, St-Jean’s team concluded that overdose prevention and substance use treatment are necessary components of quality HIV care programs. This vital study comes at a time when BC’s opioid crisis is worse than it has ever been. May saw a record 171 people die from drug overdoses. That record was tragically broken in June, which saw 175 people die of illicit drug toxicity. In the first six months of this year, 728 British Columbians died from drug overdoses. As of this writing, COVID-19 has killed 194 in BC.

Other BC-CfE attendees to AIDS2020 were able to afford the virtual conference thanks to the Bonnie Devlin Memorial Bursary Endowment Fund for Education. This fund was set up to honour Devlin (1957-2008), who worked at St. Paul’s Hospital as the Program/Research Coordinator for Vancouver Lymphadenopathy AIDS Study (VLAS) between 1986 and 1992, and later for BC-CfE between 1992 and 2007. Bonnie was considered a mother-figure at BC-CfE who everyone loved and cherished.

Julia Yinxin Zhu, a data analyst with the BC-CfE’s Division of Epidemiology and Population Health, was able to virtually attend and take full advantage of the global platform to connect with scientists, researchers, and people living with HIV from across the globe. Raquel Maria Espinoza, a data entry clerk with the BC-CfE’s Drug Treatment Program was also a beneficiary of the Bonnie Devlin Fund.

Espinoza says, “As a health professional new to the research field, I knew I would greatly benefit from being able to engage with HIV research experts to not only learn about best research practices but also in an effort to contribute to discussions that will help shape future health policies and improve patient health.”

Attendees to AIDS 2020 saw the global virtual conference end with an urgent plea. Peter Sands, Executive Director of The Global Fund to Fight AIDS, Tuberculosis and Malaria, talked about the pandemic’s drastic impact on both treatment and prevention of HIV, with lockdowns isolating people from their communities, disrupting global supply chains, and changes to local distribution of antiretroviral drugs and other vital medicines.

Sands urged everyone involved in AIDS2020 to work together to fight against the COVID-19 pandemic and the potential backslide it could bring to the progress made against HIV/AIDS, and continue to work to further reduce new infections and to reduce deaths.