BC Minister of Health announces swift progress on PrEP program

At the press event, which took place at Jim Deva Plaza in Vancouver's West End, the Minister of Health announced that the province has seen strong uptake of PrEP as the program continues to grow. Currently there are about 100 new PrEP prescriptions filled each week, with new prescribers also joining at a steady rate across the province. More than 2,000 individuals have been prescribed PrEP in BC between January 1 and July 1.

"With the expanded access to PrEP and PEP, we are making important investments to the publicly funded health system, not only because it is the right thing to do, but also because people depend on us to help them live their healthiest possible lives, and that is something we're committed to do," said BC Health Minister Adrian Dix.

Since the introduction of highly active antiretroviral therapy (HAART), which Dr. Montaner played the key role in developing, the number of new cases of HIV seen annually in BC has dropped from nearly 900 to fewer than 200. The BC Government, under NDP leadership, supported efforts to make HAART available to individuals living with HIV when the BC-CfE introduced it in 1996.

The provincial expansion of coverage for PrEP and PEP in BC, has added a new resource to the Treatment as Prevention® (TasP®) strategy. PrEP is a daily oral antiretroviral medication that is highly effective in reducing new cases of HIV, up to nearly 100% in some clinical trials. PEP is a course of antiretroviral treatment provided following a possible HIV exposure in order to prevent infection.

"The coverage of PrEP and expanded coverage of PEP has been something that many people in this community have advocated for some time," said Spencer Chandra Herbert, MLA for Vancouver-West End. "I am proud that, earlier this year, our government was able to make this treatment more readily available." 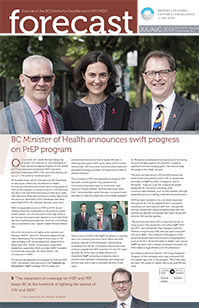 The inclusion of PrEP in the TasP® envelope is a winning tactic for achieving the end of AIDS. When the PrEP program reaches 5,000 individuals, mathematical modelling from the BC-CfE projects the province will achieve a greater than 83% reduction of new HIV cases by 2026. BC is the only Canadian province to implement TasP®, providing universal access to antiretroviral treatment immediately upon diagnosis, and the only one to see a consistent decline in new cases.

Dr. Montaner emphasized the importance of not losing focus in the fight against HIV and AIDS, in spite of significant and encouraging gains. "We need to keep the pedal to the metal," he said.

"The work we have done in HIV and AIDS proves the political will and expertise exists in BC to expand the principles of TasP® to other contagions," said Dr. Montaner. "If we can curb HIV, imagine the global leadership BC can show in tackling other communicable diseases, such as viral hepatitis, through expanding access to testing, treatment and prevention."

PrEP has been available at no cost when requested through the BC-CfE for eligible British Columbians, including men who have sex with men, transgender women, people with ongoing relationships with HIV-positive sex partners and people who inject drugs with a known HIV-positive partner.

"We are fortunate here in BC to now have access to many tools in HIV prevention—including TasP®, PrEP and PEP," said Hesham Ali, Peer Navigator with the Positive Living Society of BC who has been living with HIV since 1999. "This is thanks to the support of the provincial government and the work of organizations such as the BC-CfE and Providence Health Care. Just as TasP® has been a life-changer for people living with HIV, PrEP makes a huge difference in HIV prevention."

According to data from the BC-CfE's Drug Treatment Program, of the individuals who have accessed PrEP, the median age is 34. In the program, 73% of the users are new, 70% reside in Greater Vancouver and 99% are male.