B.C. Premier Christy Clark and Dr. Julio Montaner, director for the BC Centre for Excellence in HIV/AIDS, at historic announcement

Global landmark: Vancouver first city in the world to repurpose its AIDS ward

The dramatic decline in the number of cases of AIDS, the most serious outcome of untreated HIV infection, has prompted St. Paul’s Hospital to repurpose its AIDS ward, making Vancouver the first city in the world to achieve this distinction.

A packed room of community members and hospital staff gathered on May 27 as B.C. Premier Christy Clark – along with Michel Sidibé, United Nations (UN) undersecretary and executive director for the Joint UN Programme on HIV/AIDS (UNAIDS), Dr. Julio Montaner, director for the BC Centre for Excellence in HIV/AIDS (BC-CfE), B.C. Health Minister Terry Lake and Vancouver artist Tiko Kerr– announced ward 10C at St. Paul’s Hospital will no longer be used as a dedicated AIDS ward.

“This is a proud day for British Columbians as we mark another milestone in our leadership in the fight against HIV/AIDS,” said Premier Clark. “Thanks to the dedicated efforts of the community, those at the BC Centre for Excellence in HIV/AIDS and health professionals across the province, a ward that once served those dying from AIDS, now supports those living with HIV.”

Ward 10C at St. Paul’s Hospital in downtown Vancouver was originally opened as an AIDS ward in February 1997 during the peak of the HIV and AIDS epidemic in the city, when approximately one person was dying of AIDS every day. In B.C. earlier diagnosis of HIV, along with advances in treatment and care, has resulted in a significant decrease in cases of AIDS. 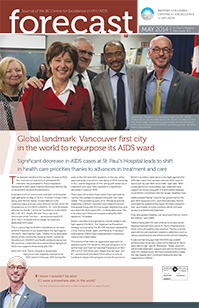 “There was a time when there weren’t enough beds to care for the numbers of people living with HIV,” said Sidibé. “The pioneering work of Dr. Montaner and the leadership of British Columbia have helped to ensure that people living with HIV live longer, healthier lives and as a result the AIDS ward in B.C. is being refocused. This is an important milestone towards ending the AIDS epidemic,” he added.

British Columbia is recognized as a world-leader in the fight against HIV/AIDS. The Treatment as Prevention strategy, pioneered by the BC-CfE, has been adopted by China, France, Brazil, Spain, and Panama. It has been endorsed by UNAIDS and implemented in numerous cities in the United States.

The province has taken an aggressive approach to addressing the HIV epidemic through programs such as the Seek and Treat for Optimal Prevention of HIV/AIDS (STOP HIV/AIDS) pilot. Beginning last year, the B.C. government provided $19.9 million in annual funding to expand this program across the province.

“British Columbia’s dedication to the fight against HIV/AIDS has meant that we have reduced AIDS cases in Vancouver by over 80% since 1996,” said Lake. “With continued focus on providing care, treatment and support for those living with HIV and related diseases, more British Columbians will live longer, healthier lives.”

Sidibé praised Premier Clark for her government’s HIV and AIDS response in B.C. and internationally. And he reminded the audience that nearly 18 million people in low- and middle-income countries still do not have access to antiretroviral treatment.

“Only with global solidarity, can we ensure that no-one is left behind,” said Sidibé.

Patients living with HIV will continue to receive world-leading treatment and care at St. Paul’s Hospital and at other clinics throughout the province. The focus of the ward will include treatment related to addictions such as various bacterial and viral infections like chronic hepatitis.

“It was not that long ago that HIV/AIDS was a death sentence and those who came to this ward at St. Paul’s were here to die,” said Dr. Montaner. “Today, ward 10C will provide treatment, support and care for those living with HIV-related issues. We have worked hard to make this day happen and I commend everyone who has supported our efforts.”