Dr. Julio Montaner urges federal government to match key donors and deliver on the promise of an HIV- and AIDS-free generation in our lifetime.

Following World AIDS Day on December 1, the Global Fund to Fight AIDS, Tuberculosis and Malaria convened leaders from around the world in Washington, D.C. to make funding pledges to end HIV and AIDS. What follows is Dr. Julio Montaner's address of Canada's pledge, which fell short of other nations.

In December, the government of Canada announced $650 million in new funding over three years for the Global Fund to Fight HIV/AIDS, Tuberculosis and Malaria.

This is the good news. The dollars contributed to the Global Fund, go directly towards helping people living with HIV in developing nations access life-saving treatment. In 2013, UNAIDS reported the scale-up of treatment has enabled nearly 10 million people to gain access to these life-saving medicines. These successes have been in large part due to the efforts of the Global Fund.

Evidence has proven treatment can eliminate progression of HIV infection to AIDS and premature death, and dramatically decrease HIV transmission. The made-in-Canada Treatment as Prevention strategy, pioneered by the BC Centre for Excellence in HIV/AIDS, calls for widespread HIV testing and immediate provision of these HIV medicines. It's a strategy that's been proven to work, here in B.C. (the only province to formally implement this strategy), and around the world, where it has been adopted as the national strategy in China, US, France, Brazil and others.

In July 2013, the World Health Organization (WHO) incorporated Treatment as Prevention as the new cornerstone of the global HIV guidelines. This has expanded the eligibility for HIV treatment from 15 million to over 25 million people in low- and middle-income countries. While this imposes a tall order in the short term, it has the potential of radically changing the course of the epidemic. Recent analyses demonstrate the full implementation of the 2013 WHO guidelines could avert over three million AIDS deaths and four million new HIV infections by the year 2025.

The Global Fund has set a target of $15 billion in funding. We cannot afford to miss this target.

Given these circumstances, Canada's newly announced contributions are not nearly enough, especially when compared to our international peers. This newest pledge is equal to approximately $6 per Canadian per year, far less than the nearly $8 per UK citizen and $10 per Nordic citizen. 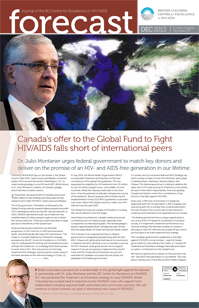 This is all part of an ongoing trend by our federal government to marginalize people living with HIV and AIDS. Ottawa will rightly pride itself about its investments in research aimed to develop a cure or possibly a vaccine for HIV. However, what good would it do to support research if we are not going to implement the results? Insite and HIV Treatment as Prevention are just two examples of Canadian successes that are simply not palatable to the federal government. In Canada, lack of a renewed National AIDS Strategy has led to a rising number of new HIV infections, particularly in Saskatchewan, Manitoba, Newfoundland, and Ottawa. The federal government is failing to address the rapid rise in HIV cases among First Nations communities, an area of their direct responsibility. And now globally, Canada has failed to match the contributions of key donors in the fight against HIV/AIDS.

Every year, 3,300 men and women in Canada are diagnosed with HIV. An estimated 71,300 Canadians are now living with HIV, a number that could double within the next 15 years if the current rate of new infections continues and treatment is not expanded across Canada.

The federal government has a unique opportunity to turn around the HIV epidemic at all levels of Canadian society, if it implements Treatment as Prevention as a national strategy. We estimate Canada can realize a decrease in new HIV infections by at least 90 per cent in just five years if we fully implement this strategy.

The Canadian government's leadership in the fight against HIV/AIDS is long overdue. I urge the Harper government to fully embrace the made-in-Canada HIV Treatment as Prevention strategy nationally and match our peers' contributions to the Global Fund.

We have an opportunity to deliver on the promise of an HIV- and AIDS-free generation in our lifetime. The only piece missing now is the political will to make it happen.

"The federal government has a unique opportunity to turn around the HIV epidemic at all levels of Canadian society if it implements Treatment as Prevention as a national strategy."
- Dr. Julio Montaner, in an op-ed published in the Toronto Star on World AIDS Day 2013.