Dr. Robert ("Bob") Hogg was officially inducted into the Order of Canada on February 1st, an accomplishment he doesn't just see as an award but as a national responsibility. "It's very humbling, especially when you start to meet other people who have been inducted, to be a part of that group," he said.

Dr. Hogg's work has strongly influenced our understanding of barriers to accessing HIV testing, treatment and care in Canada and the world. "[The BC-CfE] has always had a role of providing research not just for research's sake, but research that will have an impact. I want to make sure that the research I do will have an impact for those living with HIV in BC and even across Canada," said Dr. Hogg, during a small break between meetings at his downtown BC-CfE office.

In some ways, the hardworking Dr. Hogg is unexpectedly following his father, Dr. James Hogg, who received the Order of Canada for influencing medical understanding of the lung condition COPD. Ever humble and modest, Dr. Bob Hogg says filling in his father's footsteps was never part of the plan.

Nonetheless, from his start as a postdoctoral fellow, Dr. Hogg has had a profound influence on the infrastructure supporting people living with HIV in BC. In 1992, as a demographer with an interest in the population aspects of HIV, Dr. Hogg helped establish the database for the BC-CfE's Drug Treatment Program (DTP). At first, this was simply a filing cabinet to house clinical trial records.

Dr. Hogg helped guide the DTP's transformation into a secure database of individuals from across the province who are accessing HIV treatment, which still informs a wealth of studies. Dr. Hogg, who also serves as a professor in the Simon Fraser University Faculty of Health Sciences, is a prolific researcher and a well-respected mentor. Throughout his career, he has taught over 3,000 students and supervised more than 50 graduate students and postdoctoral fellows.

As Director of BC-CfE's Population Health and Epidemiology program from 1992 to 2014 and Senior Scientist since 2015, Dr. Hogg has been awarded more than $50 million in grants for province- and Canada-wide studies. In over 500 articles, his published research has laid the groundwork for transforming how we perceive, research and treat HIV. 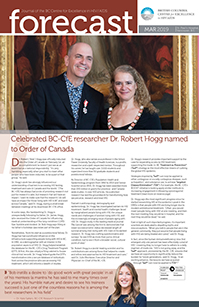 Trained in anthropology, demography and epidemiology, Dr. Hogg has investigated barriers to HIV treatment, health and mental health challenges faced by marginalized people living with HIV, the unique needs and challenges of women living with HIV, and the increasingly emerging issue of people aging with HIV. Dr. Hogg's study in the leading medical journal The Lancet was among the first to demonstrate that lower socioeconomic status decreased length of survival among men living with HIV. Even in his earliest research, Dr. Hogg was crafting questionnaires and surveys "to see [HIV] as more than just a clinical condition, but to see it from a broader social, cultural point of view."

"Dr. Robert Hogg is a world-leading scientist and his contributions are among those that helped to create and refine new approaches to HIV treatment and care," said Dr. Julio Montaner, Executive Director and Physician-in-Chief of the BC-CfE.

Dr. Hogg's research provides important support to the case for expanding access to HIV treatment, supporting the made-in-BC Treatment as Prevention (TasP) strategy as the most effective means of curbing the global HIV epidemic.

Strategies inspired by TasP can now be applied to other contagious or socially contagious diseases, such as hepatitis C and substance use, to achieve Targeted Disease Elimination (TDE®). For example, the BC-CfE's BOOST initiative is looking to apply similar methods to increasing engagement in lifesaving opioid agonist treatment.

Dr. Hogg says the most significant progress since he started researching HIV at the epidemic's peak in the 1990s is that people with HIV are living longer due to modern antiretroviral treatment. "Often, you would meet [people living with HIV] at one meeting, and then the next meeting they would be in hospital, and the next they would be dead," he said.

Even in light of such important progress, it's crucial scientists are dedicated to dispelling myths and misconceptions. "When you talk to people that are in the general community, they just assume that people [living with HIV] are being treated and cured," said Dr. Hogg.

"HIV is not going away, and the TasP approach, pioneered by the BC-CfE, ensures that we have an opportunity to significantly reduce the burden for future generations, said Dr. Hogg. "In an exciting advance, the lessons we have acquired through TasP can now be applied to TDE®."