Director of the BC Centre for Excellence in HIV/AIDS (BC-CfE), Dr. Julio Montaner, was met with a substantial level of interest as he brought to the Vatican examples of achievements in British Columbia through Treatment as Prevention (TasP). “It’s not often that you get a thumbs up from His Holiness Pope Francis,” said Dr. Montaner. The concept of TasP was pioneered at the BC-CfE, led by Dr. Montaner. Its implementation in BC, with the strong support of the provincial government, has resulted in dramatically reduced HIV morbidity and mortality, as well as a steep decline in new HIV cases.

“It is very promising the Roman Catholic Church is expressing interest in Treatment as Prevention,” Dr. Montaner said. “The Church, with all its infrastructure and outreach, would be a fantastic partner to help expand TasP globally.”

The Catholic Church has previously expressed the need to treat those affected by HIV and AIDS with compassion and dignity. Through its global service and St. Paul’s Hospital, Vancouver, B.C. charity arm, Caritas Internationalis, the church aims to provide access to antiretrovirals to those living with HIV worldwide currently not reached by treatment. The Vatican estimates Catholic Church-related organizations provide approximately one quarter of all HIV treatment, care and support throughout the world, particularly in resource limited settings where HIV rates are increasing. 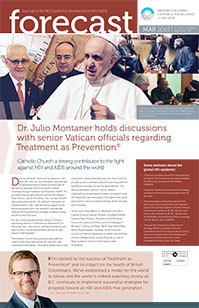 On his visit in early March, Dr. Montaner met with a number of senior Vatican officials, including Ghanian Cardinal Peter Turkson, President of the Pontifical Council for Justice and Peace, and his colleague Fr. Michael F. Czerny; and Msgr. Father Jean-Marie Mate Musivi Mupendawatu, Secretary of the Pontifical Council for Pastoral Assistance to Health Care Workers, and his colleague Sister Juliana Resende; as well as Msgr. Guillermo Karcher of the Vatican State Secretariat.

Some statistics about the global HIV epidemic: