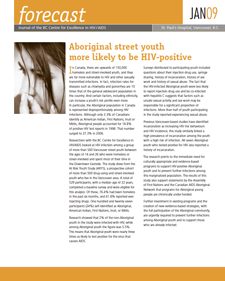 In Canada, there are upwards of 150,000 homeless and street-involved youth, and they are far more vulnerable to HIV and other sexually transmitted infections. In fact, infection rates for diseases such as chlamydia and gonorrhea are 10 times that of the general adolescent population in the country. And certain factors, including ethnicity, can increase a youth’s risk profile even more. In particular, the Aboriginal population in Canada is represented disproportionately among HIV infections. Although only 3.3% of Canadians identify as American Indian, First Nations, Inuit or Métis, Aboriginal people accounted for 18.8% of positive HIV test reports in 1998. That number surged to 27.3% in 2006.

Researchers with the BC Centre for Excellence in HIV/AIDS looked at HIV infection among a group of more than 500 Vancouver street youth between the ages of 14 and 26 who were homeless or street-involved and spent most of their time in the Downtown Eastside. The study drew from the At Risk Youth Study (ARYS), a prospective cohort of more than 500 drug-using and street-involved youth who live in the Vancouver area. A total of 529 participants, with a median age of 22 years, completed a baseline survey and were eligible for this analysis. Of these, 76.4% had been homeless in the past six months, and 41.8% reported ever injecting drugs. One hundred and twenty-seven participants (24%) self-identified as Aboriginal, American Indian, First Nations, Inuit, or Métis.

Surveys distributed to participating youth included questions about their injection drug use, syringe sharing, history of incarceration, history of sex work and history of sexual abuse. The fact that the HIV-infected Aboriginal youth were less likely to report injection drug use and be co-infected with hepatitis C suggests that factors such as unsafe sexual activity and sex work may be responsible for a significant proportion of infections. More than half of youth participating in the study reported experiencing sexual abuse.

Previous Vancouver-based studies have identified incarceration as increasing HIV risk behaviours and HIV incidence; this study similarly linked a high prevalence of incarceration among the youth with a high risk of infection. All seven Aboriginal youth who tested positive for HIV also reported a history of incarceration.

The research points to the immediate need for culturally appropriate and evidence-based programs to support HIV-positive Aboriginal youth and to prevent further infections among this marginalized population. The results of this study also support statements by the Assembly of First Nations and the Canadian AIDS Aboriginal Network that programs for Aboriginal young people are chronically under-funded.

Further investment in existing programs and the creation of new evidence-based strategies, with the full participation of the Aboriginal community, are urgently required to prevent further infections among Aboriginal youth and to support those who are already infected.