‘We know by increasing community capacity, we can improve patient care and efficiency for our investments,’ says health minister

The government is the longest adopter of the Treatment as Prevention (TasP) strategy and has recognized Dr. Julio Montaner for the success of significantly improving health outcomes and providing a sustainable model for health-care delivery.

The B.C. government recognized Dr. Julio Montaner for his pioneering work in developing the TasP strategy at the BC Centre for Excellence in HIV/AIDS. TasP has dramatically reduced rates of new HIV transmission, significantly improved the quality of life for HIV-positive individuals and provided a model that is cost averting.

BC-CfE Director, Dr. Julio Montaner accepted his Certificate of Appreciation from provincial Minister of Health, Terry Lake at a special event at the Legislature in Victoria, B.C. Lake commended Dr. Montaner for his lifelong commitment to providing care and treatment to HIV positive individuals, including pioneering Highly Active Antiretroviral Therapy (HAART) and TasP. Minister Lake made the address to sitting members of the Legislative Assembly. 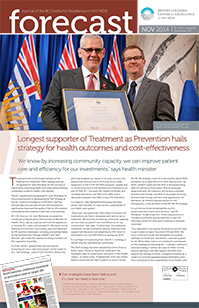 In 2009, the B.C. government announced the launching of a four-year pilot project of the made-in- B.C. TasP strategy, called STOP HIV/AIDS. Before the pilot had wrapped up, based on its early success, the government announced in 2013 a province-wide expansion of the STOP HIV/AIDS program. Largely due to universal access to HIV antiretroviral medications as part of TasP, B.C. has seen HIV-related morbidity and mortality decline by over 95% since 1995, and a decrease of greater than 66% of new HIV infections.

In a speech, Lake highlighted emerging new data shows TasP will help “to improve the sustainability of our health care system.”

“Each year, we spend over $100 million to ensure HIV medications are free to all people who wish to be on treatment. We know by increasing community capacity, we can improve patient care and efficiency for our investments,” said Lake. “Furthermore, the additional investment aimed to enhance testing, treatment and support will become cost-adverting by 2017 and it is estimated to accrue $48 million in savings by 2035.

“It is perhaps not surprising then, that B.C.’s strategy is influencing the international community.”

The TasP strategy has been adopted by China, France, Brazil, Spain, Panama, Argentina, Swaziland, the Australian state of Queensland, and parts of the United States – to name a few. In September 2014, the United Nations endorsed the TasP model in its launch of the 90-90-90 strategy, a plan for reducing the global AIDS pandemic by at least 90% of its 2010 rate by 2030. By 2020, UNAIDS’ goals are that 90% of all people living with HIV will know their status, 90% of all people diagnosed with HIV infection will receive sustained antiretroviral therapy, and 90% of all people receiving antiretroviral therapy will have viral suppression. Dr. Montaner, as UNAIDS Special Advisor on HIV Therapeutics, is the architect of the 90-90-90 strategy.

“It is an honour to be recognized by our B.C. government but much work remains,” said Dr. Montaner. “In particular, B.C. is the only province in Canada consistently seeing a decline in new HIV infections while HIV infections continue to increase nationally.”

“It is important to recognize the distance we still have to go in order to reach the end of HIV and AIDS. We must continue to build and strengthen accessible pathways to treatment, prevention, care and support for all. While other nations are striding forward based on the strategy pioneered by B.C., Canada is without a national strategy. Further, we need to reflect on the lessons learned in the fight against HIV/AIDS and expand the strategy to other contagious diseases as a means to promote targeted disease elimination and thus contribute to the sustainability of our health care.”