On April 24th, Federal Health Minister Hon. Ginette Petitpas Taylor visited the BC Centre for Excellence in HIV/AIDS (BC-CfE) to speak to Executive Director & Physician-in-Chief Dr. Julio Montaner about BC's leadership in HIV, hepatitis C (HCV) and opioid use disorder (OUD). The BC-CfE has long played an essential role in the testing, diagnosis, treatment and ongoing monitoring of people living with HIV in British Columbia, and is transferring that knowledge to HCV and OUD.

Dr. Montaner discussed how the made-in-BC Treatment as Prevention (TasP) strategy and Targeted Disease Elimination (TDE®) platform are providing a framework for the treatment and prevention of other communicable diseases and diseases with a social contagion factor, such as hepatitis C. The TDE® strategy can also be applied to the opioid crisis. For example the BOOST (Best practices in Oral Opioid agoniSt Therapy) Provincial Collaborative, based on the BC-CfE's success from the STOP HIV/AIDS Structured Learning Collaborative, was highlighted as a novel tool in bringing down the number of opioid-related deaths in BC through improved engagement in opioid agonist treatment.

In early April, Dr. Montaner, met with City of Vancouver Mayor Kennedy Stewart to discuss the BC-CfE's research and work in the area of public policy with a focus on TasP and TDE®.

In findings released in The Lancet, the PARTNER study found no cases of HIV transmission through condomless sex among gay couples in which one partner was living with HIV on treatment and the other was HIV-negative. These results follow previous PARTNER study findings showing no cases of HIV transmission in more than 58,000 instances of condomless sex among serodiscordant homosexual and heterosexual couples.

"The PARTNER study is bolstered by over a decade-long history of scientific research by the BC-CfE supporting access to HIV treatment as a means to control the epidemic," says Dr. Montaner. "These results show consistent and sustained HIV treatment absolutely eliminates the risk of HIV transmission to sexual partners, equally among heterosexual and homosexual couples." 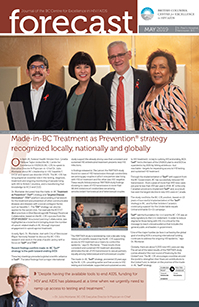 Through the implementation of TasP with support from the BC Government, BC has successfully reduced HIV transmission—from a peak of more than 850 new cases per year to less than 200 per year in 2018. BC is the only Canadian province to implement TasP and, as a result, has seen the largest decline in new HIV cases in Canada. The study confirms the BC-CfE position, based on 13 years of successful implementation of the TasP strategy in BC, and further bolsters Canada's continuing support for the Undectable equals Untransmittable (U=U) campaign.

TasP laid the foundation for U=U and the BC-CfE was an early signatory to the U=U statement. In order to reduce stigma for those living with HIV, it is critical for this message to reach a broad audience that includes the general public and leaders in government.

"One of the major hurdles we face in achieving the global goal of ending AIDS is ensuring international funding continues to address the ongoing HIV epidemic," says Dr. Montaner.

Globally, there are about 5,000 new HIV cases per day. The arrival of the latest results of the PARTNER study comes ahead of the next round of financing for the Global Fund. The BC-CfE encourages countries around the world to strengthen their financial contributions to the Global Fund, to deliver on the promise of the made-in-BC TasP strategy.