A researcher in the BC Centre for Excellence in HIV/AIDS (BC-CfE)’s Urban Health Research Initiative, Dr. M-J Milloy, will lead a clinical study on the possible therapeutic benefits of cannabis in the treatment of HIV/AIDS. His independent research into HIV and cannabis is supported by a $1-million gift to the University of British Columbia Faculty of Medicine by National Green Biomed Ltd.

The clinical study follows previous research led by Dr. Milloy, which identified an association between marijuana use and lower viral loads (the amount of virus in a person’s blood) among patients living with HIV. The BC-CfE study High-intensity cannabis use associated with lower plasma human immunodeficiency virus-1 RNA viral load among recently infected people who use injection drugs was published in Drug and Alcohol Review in March 2015 and included interviews from 88 individuals in the year following acquisition of the virus participating in the National Institutes of Health-funded study AIDS Care Cohort to evaluate Exposure to Survival Services (ACCESS). 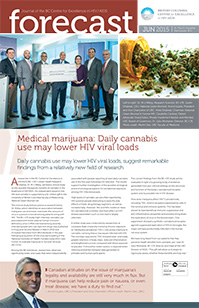 Among the 88 individuals, researchers observed significantly lower viral loads that were independently associated with people reporting at least daily cannabis use in the first year following HIV infection. The results support further investigation of the possible virological and immunological aspects of cannabinoid exposure among HIV-infected people.

High levels of cannabis use are often reported by HIV-positive people attempting to ease the side effects of triple-drug therapy regimens, as well as recreationally. However, the scientific evidence-base for cannabinoids is limited, and their effect on HIV disease parameters such as viral load is largely unknown.

A similar study was conducted by researchers at Louisiana State University involving chronic exposure to Tetrahydrocannabinol (THC) — the active chemical in cannabis — among rhesus macaques infected with HIV. The monkeys exposed to THC showed lower viral loads, greater retention of body mass, reduced inflammation and lengthened survival compared with those exposed to placebo. It should be noted caution is required when inferring similarities between data generated in primates and human participants.

The current findings from the BC-CfE study will be evaluated in light of a growing body of evidence generated from pre-clinical settings on the structure and function of the body’s cannabinoid receptor system and its possible role in HIV disease.

How does marijuana affect HIV? Cannabinoids, including THC, bind to receptors expressed by cells in the nervous and immune systems. This has been shown to have beneficial immune-suppressive and anti-inflammatory properties and possibly bring down the replication of virus in the bloodstream. One experiment showed a synthetic cannabinoid receptor agonist suppressed replication of HIV in microglia, the major cell type productively infected in the human nervous system.

We have long heard from our patients that they perceive health benefits from cannabis use,” said Dr. Julio Montaner, BC-CfE director and head of the UBC Division of AIDS. “This gift will allow us to begin to rigorously assess whether these benefits are truly real.”