New legislation introduced by the federal government earlier this month threatens the health and safety of sex workers, according to researchers at the BC Centre for Excellence in HIV/AIDS (BC-CfE).

The proposed legislation was announced shortly after a new study was published by researchers of BC-CfE’s Gender and Sexual Health Initiative (GSHI). The study, published in BMJ Open, one of the top peer-reviewed global health journals, found criminalizing clients endangers the health and safety of the most marginalized sex workers. 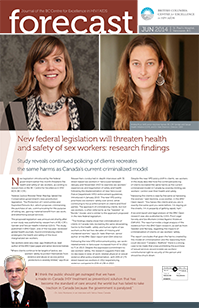 “Where clients continue to be targets of police, sex workers’ ability to protect themselves from violence and abuse or access police protections is severely limited,” says Krusi

Researchers conducted in-depth interviews with 31 street-based sex workers in Vancouver between January and November 2013 to examine sex workers’ experiences and negotiation of safety and health following the implementation of new Vancouver Police Department (VPD) enforcement guidelines introduced in January 2013. The new VPD policy prioritizes sex workers’ safety over arrest, while continuing to focus enforcement on clients and third parties. The approach of criminalizing clients, but not sex workers, is often referred to as the “Swedish” or “Nordic” model, and is similar to the approach proposed in the new federal legislation.

“The findings clearly show that criminalization of clients in Canada risks recreating the same devastating harms to the health, safety and human rights of sex workers as the last two decades of missing and murdered women,” says Dr. Kate Shannon, senior author of the BMJ Open report and GSHI director.

Following the new VPD enforcement policy, sex work-related arrests in Vancouver increased from 47 in 2012 to 71 in 2013. Despite the expressed commitment to sex workers’ safety, the research suggests there was no decrease in rates of work-related physical or sexual violence after policy implementation, with 24% of 275 street-based sex workers in 2012 experiencing violence compared to 25% of 236 in 2013.

Despite the new VPD policy shift to clients, sex workers in the study describe how the continued policing of clients recreated the same harms as the current criminalized model in Canada by severely limiting sex workers’ control over their health and safety.

The research concludes that given the harms created by this model of criminalization and the reasoning from court decision Canada v. Bedford, there is a strong case to be made that a law prohibiting the purchase of sexual services would violate sex workers’ constitutional right to security of the person and should be struck down.