Treatment as Prevention leads to B.C. having largest decline in rate of new HIV diagnoses

Policymakers need to adopt Treatment as Prevention as a national strategy to fight HIV/AIDS, urges researchers at the BC Centre for Excellence in HIV/AIDS (BC-CfE) in an article published this month in HIV Medicine.

New HIV diagnoses in British Columbia are continuing to decline at a rate faster than in other Canadian regions, report researchers after analyzing Health Canada data from 1995 to 2011.

“British Columbia, of all Canadian jurisdictions, has had the largest decline in the rate of new HIV diagnoses and in lifetime costs averted over the study period,” write the authors, who include Dr. Julio Montaner, director of the BC-CfE, and Dr. Robert Hogg, director of the Epidemiology and Population Health Program at the BC-CfE. “Further efforts are needed to optimize the potential impact of Treatment as Prevention in the whole of Canada.”

B.C., where the Treatment as Prevention strategy was pioneered and implemented, is the only province to promote widespread and fully government-supported access to HIV testing and highly active antiretroviral therapy (HAART). As a result, B.C. has seen HIV-related morbidity and mortality decline by approximately 90 per cent since the early 1990s, and the number of new HIV diagnoses has fallen from approximately 800 per year prior in 1996 to 238 in 2012. 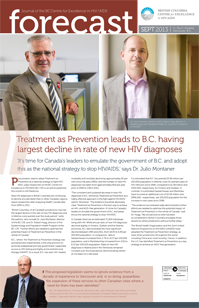 “The consistent and sustained decrease in new HIV diagnoses in B.C. reinforces Treatment as Prevention as a highly effective approach in the fight against HIV/AIDS,” said Dr. Montaner. “The evidence should be absolutely clear: Treatment as Prevention is the best way to achieve an HIV- and AIDS-free generation. It’s time for Canada’s leaders to emulate the government of B.C. and adopt this as the national strategy to stop HIV/AIDS.”

“The evidence we reviewed really demonstrates further efforts are needed to optimize the potential impact of Treatment as Prevention in the whole of Canada,” said Dr. Hogg. “We should look at what has been accomplished in British Columbia and apply those lessons to other jurisdictions without further delay.” The World Health Organization and the Joint United Nations Programme on HIV/AIDS (UNAIDS) have adopted the Treatment as Prevention strategy, as have other jurisdictions throughout the world, including China and, most recently, France. In addition, the U.S. has identified Treatment as Prevention as a key strategy to achieve an AIDS-free generation.