The national AIDS strategy is nearly a decade old and desperately needs updating. In B.C., our Treatment as Prevention (TasP) strategy has been successful in dramatically decreasing new cases of HIV and morbidity and mortality. It is now providing the road map for global elimination of the HIV pandemic. While this made-in- B.C. strategy is now embraced globally, this is not the case in the rest of Canada.

Nearly 20 years ago, the BC Centre for Excellence in HIV/AIDS (BC-CfE) created triple drug therapy, the new highly active antiretroviral therapy (HAART) regimen. HAART turned HIV and AIDS from a death sentence into a chronic manageable condition. A decade later, we pioneered and demonstrated the very same HAART regimen could dramatically reduce the likelihood of HIV transmission – this strategy we named Treatment as Prevention.

Simply put: we now have definitive evidence a person infected with HIV with undetectable levels of HIV virus, as a result of HAART use, has little to no chance of developing AIDS and transmitting HIV. In 2006, this led us to advocate for the expansion of HAART coverage, under the banner of Treatment as Prevention, to prevent illness, death and secondarily, new HIV infections. Of note, the TasP strategy not only saves lives, it is cost-averting. 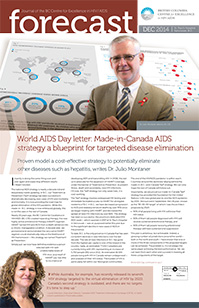 The TasP strategy involves widespread HIV testing and immediate facilitated access to HAART for all eligible residents of B.C. In B.C., we have decreased progression to AIDS and related premature deaths by over 95% since we began treating with HAART, and decreased the spread of new HIV infections by over 66%. The strategy has been so successful, the province’s dedicated HIV/ AIDS ward – which opened in 1997 at St. Paul’s Hospital in Vancouver – was re-purposed earlier this year due to the significant decline in new cases of AIDS in the province.

To date, B.C. is the only province in Canada that has seen consistent declines in new infections over the last decade. The rate of new infections in B.C. has gone from the highest per capita to one of the lowest in the country. Sadly, an estimated 77,000 Canadians are currently living with HIV, representing an increase of 5,700 people (8%) since 2011. An estimated 18,500 people living with HIV in Canada remain undiagnosed – and unaware of their HIV status. The burden of HIV is particularly felt within our Aboriginal communities.

The end of the HIV/AIDS pandemic is within reach. Countries around the world are rallying behind the made-in-B.C.-and-Canada TasP strategy. We can only hope the rest of Canada will follow suit.

Importantly, we are proud our made-in-Canada TasP strategy has provided the foundation for the United Nations’ (UN) new global plan to end the AIDS epidemic by 2030. Announced in September, the UN plan, known as the “90-90-90 target” of which I was the architect proposes by 2020:

This plan is ambitious, but achievable. Indeed, a growing number of jurisdictions around the world – both in the north and south – have shown that one or more of the three components of the proposed targets can be achieved. The problem is, it’s not always the same player achieving the best performance. Yet, we can learn from each other and succeed in meeting all three components of the target.