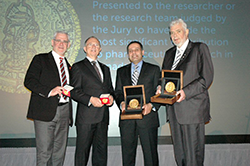 The HRF Medal of Honour was presented to Dr. Montaner during a ceremony held in Montreal Tuesday, November 20, co-hosted with Prix Galien Canada.

Along with the medal, Dr. Montaner also received a $20,000 prize, which he has donated to the Michael Smith Foundation for Health Research to support HIV/AIDS-related research.

Dr. Montaner is the Director of the BC Centre for Excellence in HIV/AIDS. He is a former President of the International AIDS Society and holds an endowed Chair in AIDS Research at SPH /UBC. In the mid-1990s, Dr. Montaner’s innovative research led to the development of highly active antiretroviral therapy (HAART), a triple-drug therapy now the gold standard of HIV treatment. He has pioneered the implementation of Treatment as Prevention, which calls for the expansion of HAART coverage to simultaneously decrease progression to AIDS and death, as well as to prevent HIV transmission.

As the only province to implement the strategy, British Columbia has seen HIV-related morbidity and mortality decline by approximately 90 per cent. In addition, the number of new HIV diagnoses has fallen from approximately 800 per year prior to 1996 to 238 in 2012. B.C. is the only province demonstrating a consistent decline in new cases of HIV. The strategy has gained global acceptance.

“The Health Research Foundation is proud to award the Medal of Honour to the Honourable Kelvin K. Ogilvie and Dr. Julio Montaner,” said Mr. Russell Williams, President of Canada's Research-Based Pharmaceutical Companies (Rx&D). “Above and beyond their extraordinary impact on biotechnology and AIDS research respectively, they have both demonstrated and exemplified dedication to the advancement of knowledge in innovative health research.”