"We call on the G8 and G20 governments meeting in Canada and on other donor countries to keep their promise to provide access to HIV treatment." 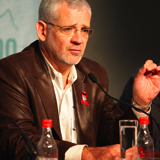 In 2005, the G8 committed to providing access to HIV treatment, prevention, care and support for all those who need it by 2010. Despite that promise, in 2008 two million people died of AIDS-related illness, and the number of new HIV infections continues to outstrip the number of people being treated. For every two people starting treatment, a further five become infected with the virus.

The stark reality is that for every moment this promise is not kept someone is dying a preventable death or becoming infected with HIV. This is due to an unacceptable lack of access to treatment and prevention services.

You can help put pressure on G8 and G20 leaders as they come together in Canada. Help make sure they put forward a costed and time-bound plan to deliver on their commitment to achieve universal access to HIV and AIDS prevention, treatment, and care services for all those in need.

Together, we can stop HIV and AIDS.

Many thanks,
Dr. Julio Montaner
Director; BC Centre for Excellence in HIV/AIDS
President; International AIDS Society