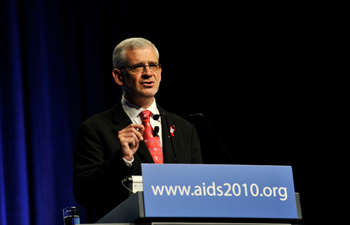 Dr. Julio Montaner:  We’re coming to the end of a week that I believe can and will change the course of the epidemic. We have heard this week about significant advances in the field of HIV and AIDS. I am particularly pleased with the very promising results of first proof of concept of a vaginal microbicide. This opens the door for a completely new synergistic tool in the HIV prevention.

More importantly, this approach has the potential to go a long way towards empowering women and girls in the years ahead. We have also seen very compelling data regarding the secondary preventive value of antiretroviral therapy. Expanding hard coverage among individuals meeting the eligibility criteria recently proposed by WHO will save millions of lives. Equally important it will save millions of new infections.

Treatment as prevention is a true game changer. As MSF likes to say it will bend all the curves. Further, expanding hard coverage will have multiple other benefits including decreasing tuberculosis, decreasing the number of orphans, preserving and strengthening healthcare systems among others. As such, universal access is the fundamental building block for maternal and child health. Let me say this once more, there cannot be maternal and child health without universal access.

In fact universal access is a prerequisite to deliver each and all of the MDG millennium development goals. Without universal access, we will have no MDGs. I am particularly thrilled that at this meeting Michel Sidibe, the Executive Director of UN AIDS launched the Prevention Revolution and Treatment 2.0 which incorporates the notion that treatment is prevention.

Dear friends, I urge to rally behind Michel as he fights to secure the much needed support for this bold and ambitious initiative. Throughout this meeting, hundreds of presentations have also brought forward the word of thousands of researchers and front line workers, doctors, nurses, community care givers, counselors, policy makers and funders who have dedicated their lives to the AIDS response. We thank you for your courage, your commitment and enthusiasm.

This was really contagious and gave Vienna 2010 a unique atmosphere that will live in our memory for a long time. None of the words reported here could have happened without the support, encouragement and at times the not too subtle pressure of tens of thousands of people living with and at risk for HIV and AIDS. People living with and at risk for HIV are at the center of everything we do. They are our compass, they are our motivation. With them we will eventually defeat this virus.

I also want to acknowledge the fantastic contribution that the Conference had on the part on the Global Village. This was one of the most vibrant experiences in Vienna 2010. It was impressive to see for example the Eastern European policy makers engaging in open and frank discussions with IDU community activists. Let’s hope that this is only the beginning of a new trend.

As Vienna 2010 comes to a close, I want to thank you in particular the people who have made this conference a success and we will help ensure that millions of people around the world can also receive and use the information that we share.

These include the parent committees and working groups, our sponsors, our donors, our conference partners, the conference center and all the suppliers, the Conference Secretary in Geneva and Vienna, all the speakers, chairs, moderators and reporters and of course a special and very heartfelt thanks to the yellow sea of volunteers who made everything so incredibly effective.

People living with HIV and drug users have used this conference as an important opportunity to reach out to decision makers. They have made their voices heard. Now we must act to make sure that action follows that voice. I want to offer a special thanks to the neighbors of persons living with HIV and AIDS and drug users groups from the Eastern European community who have seized the opportunity of this conference to engage with policy makers, scientists and activists from all over the world to draw attention to what is happening in their region.

Now we must all continue the work by exposing both the criminalization of injecting drug users in many countries and the abuse of the scientific evidence by governments such as Russia which after more than two decades of epidemic still continues to deny IDUs access to treatment such as methadone. This is simply not acceptable.

A decade ago, 100,000 people were living with HIV in Eastern Europe. Today that number is one million. Most have contracted HIV through drug use. It is painfully obvious that current policies are not working and it must be changed urgently. This borders with criminal negligence.

I want to acknowledge all of those who have signed and who intend to sign the Vienna Declaration calling for the end of the war on drugs and decriminalization of drug use. The broad support for the Vienna Declaration from across the AIDS movement and the scientific community at this conference sends a strong signal to policy makers regarding the importance of drug policy reform in the fight against HIV and AIDS. 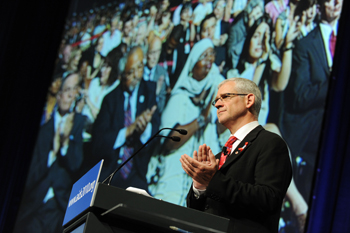 Thanks to the First Lady of Georgia in particular who signed the Declaration. I now want to urge her to shine the light of the Vienna Declaration on the region and become our enthusiastic ambassador to Eastern Europe [applause]. I will carry your voices with me when I deliver the Vienna Declaration with all of these many thousands of signatures to the Secretary General of the United Nations Ban Ki-moon who by the way has already stated that he supports the criminalization of drug users.

We trust the Secretary General will use the Vienna Declaration to encourage the entire United Nations system to follow through on its ethical obligation to pursue evidence based approached to address the intersecting epidemics of drug addiction and HIV/AIDS.

To men who have sex with men and all the LGBT communities who face daily stigma and violation to life, I thank you for your bravery and determination to be heard.

At this conference, we have seen the first stage of spectacular evidence that we cannot defeat this epidemic without targeted strategies to address the needs of MSMs in any and all programs.

Similar evidence was clearly highlighted in the special NIDA session earlier today and the Lancet session related to HIV and IDUs. At the end of the day, we need to address the communities at risk and infected if we are going to address the epidemic effectively.

For the millions of women and girls living with and at risk for HIV, we must continue to prioritize the access to treatment, the female focus prevention tools and the human rights protection that will be essential to conquer the epidemic. We must make a similar commitment for the infected and affected children and we must commit to do everything in our power to ensure that this is the last generation impacted by this disease.

I want to acknowledge the efforts of the United States which has been a steadfast partner in the fight against HIV and AIDS. The country’s monetary and scientific contribution to the cause have been remarkable. President Obama, your leadership in changing policies that infringe on human rights including [inaudible] problem immigration and the recent federal funding for needle exchanges were long overdue, but they are still most welcome.

Now we ask you to do more to support marginalized groups that have been hard hit by HIV and AIDS including sex trade workers and recommit to full funding the universal access. The U.S. has the power to literally change the course of the epidemic. Now is the time to reprioritize the universal access commitment and recommit to an agenda that places health as the number one priority.

As we begin to plan for Washington 2012, we must also recognize that indigenous peoples around the world including first nations in Canada have been a disproportional and intolerable than from HIV and AIDS. We have an urgent moral and ethical obligation to address the inequities faced by indigenous people.

Today we stand with indigenous people in demanding that our governments commit to resolving issues of discrimination, cultural disruption and systemic poverty that led to the spread of HIV in the indigenous communities.

Philanthropists and global advocates such as Bill Clinton and Bill Gates have made enormous differences in the global AIDS response and we are deeply grateful for the participation here and their work every day of the year to help stop HIV and AIDS.

Leaders such as Nelson Mandela and Desmond Tutu who could not be here in person have loaned their names, their spirit and their moral authority toward costs. Gordon Campbell, the leader of home province British Columbia has invested deeply in helping us develop and prove the concept Treatment as Prevention and he deserves our appreciation.

France’s First Lady, Carla Bruni Sarkozy, has come out as a strong supporter of Treatment as Prevention and the need to come through on the promise of universal access. We ask her to ensure that her husband, the President of France, becomes a forceful advocate for that position when France hosts the next year.

We’re eternally grateful for the leadership of the political philanthropic and spiritual leaders which has helped to transform the AIDS response, but where are the others? Are these the only political, spiritual and philanthropic leaders in the world? All world leaders should be here, all should be expressing their solidarity with our case and fighting to stop AIDS.

We are grateful to the people of Austria for having worked on this. President Fisher spoke eloquently and emotionally at the opening ceremony. Mr. President, we thank you for that. Now please show us the money. Austria should fund the Fund and then we want you to join us in calling for the rest of your international colleagues to fully fund the Global Fund.

I also would like to have a special word of recognition to the Prime Minister of Canada, Mr. Stephen Harper, the Chair of this year’s G8 and G20 and also to his Health Minister, Ms. Leona Aglukkaq for demonstrating yet again their incredible ability to take credit where none is due.

I am ashamed to say that the government of Canada has punched well below its weight in funding universal access and supporting those affected by HIV and AIDS in Canada and around the world. Progress almost always produces resistance. As we leave here confident that this epidemic can be controlled and can be defeated with human evidence, informed human rights and to responses, we must also prepare ourselves for the inevitable cry from the international governments.

We face a crisis of resources they will tell us. There is not enough money to do the right things. If we had the money, we would do it. That is simply not true. The challenge is not finding the money, but the challenge is to find the priorities.

When there is a world street emergency or an oil spill, billions upon billions of dollars are quickly mobilized, but when there is a need for a rapid response to the global health crisis of HIV and AIDS, people’s health deserves a similar response and yet we cannot find it.

As we say farewell to each other and pack our bags to leave Vienna, we must remember that another seven thousand people will become infected today as they did yesterday and they will do tomorrow. So let us go back home and pick up where we left, but with the other knowledge and enthusiasm and the energy that we gained this week.