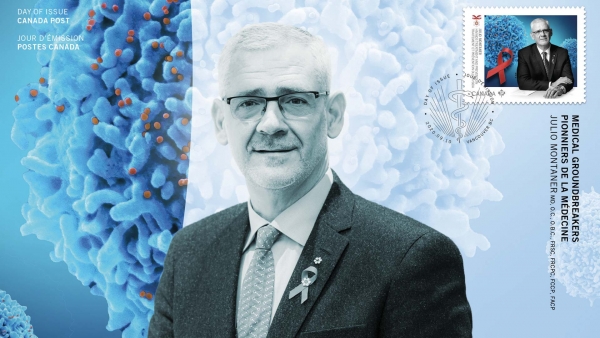 The BC-CfE’s Executive Director & Physician-in-Chief Dr. Julio Montaner was honoured by Canada Post this week as part of their Medical Groundbreakers stamp series.

In addition to Dr. Montaner, the other honourees in the Canada Post stamp series are Drs. Bruce Chown, Balfour Mount, M. Vera Peters, James Till and Ernest McCulloch.

He led the development of highly active antiretroviral therapy (HAART), now considered the global standard of care. He also pioneered Treatment as Prevention, a strategy that has markedly reduced HIV transmission and has the potential to end the HIV/AIDS epidemic worldwide.

Dr. Montaner, who’s been invested in the Order of Canada and inducted into the Canadian Medical Hall of Fame, said, “This particular honour has unique significance because I view it as the recognition from the people of my adopted country, Canada.”

The image on Dr. Montaner’s stamp was photographed by the BC-CfE’s Website and Digital Strategy Coordinator Fernando Prado, and the stamp was designed by Vancouver’s Mike Savage and Dale Kilian at Signals.

The Permanent™ domestic rate stamps are available in a booklet of 10 and can be purchased at canadapost.ca/shop.