“We cannot manage what we do not measure” - Hon. Kevin Falcon

Hon. Kevin Falcon thanks Dr. Julio Montaner and the BC-CfE for continued research and commitment to BC’s fight against HIV/AIDS at an event honouring Dr. Montaner's efforts. 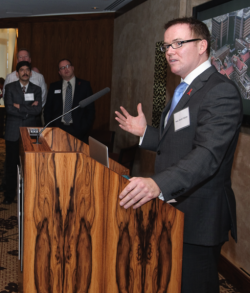 Providence Health Care and the St. Paul’s Hospital Foundation celebrated the accomplishments of Dr. Julio Montaner and his leadership in the global response to HIV and AIDS at an event on October 13, 2010.

Dr. Julio Montaner was recognized for his work in the development of a revolutionary strategy to curb the growth of the HIV epidemic in British Columbia. Under the leadership of Dr. Montaner and with the support of the provincial government, a pilot project with Northern Health (Prince George) and Vancouver Coastal Health (Vancouver Inner City) is under way. The pilot project entitled, Seek and Treat for Optimal Prevention of HIV/AIDS (STOP HIV/AIDS) has been funded by the Minister of Health over four years. This program will utilize HIV treatment as a prevention strategy to curb the growth of the epidemic among marginalized populations.

At the event, British Columbia’s Minister of Health Services, Hon. Kevin Falcon spoke about the dedication and tireless commitment Montaner has demonstrated in his work, the Minister also thanked Dr. Montaner and his team at the BC-CfE for their commitment in BC’s fight against HIV/AIDS. 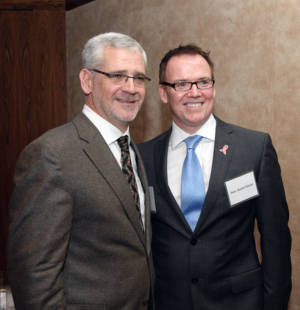 For almost three decades, Dr. Julio Montaner has stood on the frontline of British Columbia’s response to HIV and AIDS. His contributions to the knowledge of HIV treatment have been instrumental in improving the health of tens of thousands in Canada and millions worldwide. Julio Montaner’s research, innovation, and tireless advocacy on behalf of all individuals have earned him many honours. Within the last year alone, he has been recognized with fellowship in the Royal Society of Canada, an honourary degree from Simon Fraser University, and most recently, the Order of British Columbia and the Albert Einstein World Award of Science.