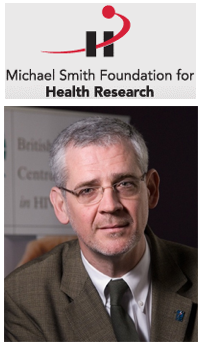 June 21, 2010 - BC Centre for Excellence in HIV/AIDS clinical director Dr. Julio Montaner is the first recipient of the Aubrey J. Tingle Prize, created in honour of the founding President and CEO of the Michael Smith Foundation for Health Research.

Dr. Montaner received the $10,000 award at a June 16th event that also celebrated young researchers who received awards in the 2009 MSFHR trainee competition.

“Dr. Montaner’s work has contributed to important advances in the treatment and care of people with HIV/AIDS,” says MSFHR President and CEO Dr. John Challis. “It is very fitting that he receives this prize, dedicated to a BC clinician scientist or scholar practitioner whose work has provincial and also global significance.”

President of the International AIDS Society, Dr. Montaner helped establish the efficacy of HAART (highly active antiretroviral therapy), which emerged from the International AIDS conference in Vancouver in 1996. Dr. Montaner is also a Professor of Medicine at the University of British Columbia and has held the Endowed Chair in AIDS Research at St. Paul’s Hospital/UBC since 1996. In 2009, he was inducted into the Royal Society of Canada-The Academies of Arts, Humanities and Sciences (RSC).

Dr. Montaner was a guest speaker, along with four trainee award recipients, at the MSFHR Research Trainee Awards Celebration.