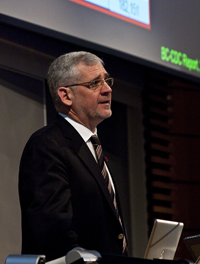 Dr. Julio Montaner, director of the B.C. Centre for Excellence in HIV/AIDS (BC-CfE), met with the UNAIDS secretariat in Geneva last month to present his groundbreaking case for HIV prevention through expanded access to antiretroviral therapy.

Dr. Montaner’s Mar. 24 presentation to UNAIDS highlighted the dramatic reduction in HIV transmission and prevalence that may be achieved through the scale-up of highly active antiretroviral therapy (HAART) as part of a comprehensive prevention strategy.

The “Treatment as Prevention®” concept, pioneered by the BC-CfE, has received acclaim from a broad range of international policy leaders, including Bill Clinton, Stephen Lewis, the World Health Organization, the International AIDS Society, Science, and The Economist. A July 2009 Globe and Mail feature heralded Treatment as Prevention® as “one of the hottest issues in AIDS science.”

The concept has been put into practice in British Columbia through the Seek and Treat pilot project, launched in February with a $48-million commitment from the Ministry of Health Services. A similar “Test and Treat” program based on Treatment as Prevention® will be launched this year in New York and Washington, D.C. by the U.S. National Institutes of Health. Public health officials in San Francisco have also joined the call for expanded treatment, altering guidelines this week to start patients on HAART as soon as they are diagnosed.

WHO Treatment as Prevention® page