Julio Montaner Awarded Order of BC 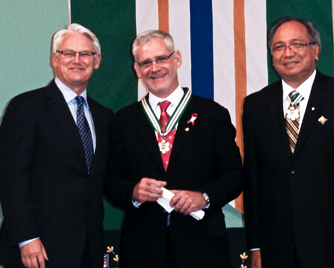 Dr. Julio Montaner, director of the BC Centre for Excellence in HIV/AIDS, was one of fifteen extraordinary British Columbians who received the 2010 Order of British Columbia in a ceremony Thursday, Oct. 21, 2010 at Government House in Victoria.

The Order recognizes British Columbians who have made a difference, who have contributed with excellence and distinction, and whose contributions provide inspiration to everyone.

Dr. Montaner was recognized for his work in the development of a revolutionary strategy aimed to curb the growth of the HIV epidemic in British Columbia. The made-in-BC strategy known as “treatment as prevention” aims to utilize HIV medication called High Active Antiretroviral Therapy (HAART) to prevent HIV transmission through viral suppression. Recognized as the gold standard treatment for HIV, HAART uses a combination of drugs to stop HIV from progressing to AIDS, extends life expectancy, and significantly reduces HIV-related deaths in diagnosed individuals. 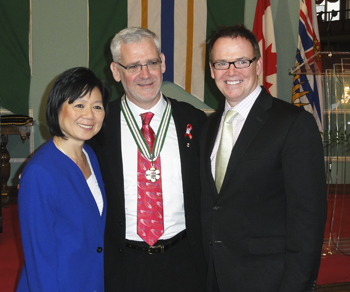 The BC Centre for Excellence in HIV/AIDS, under the leadership of Dr. Montaner is currently implementing this bold new strategy in a pilot project in collaboration with the Province of British Columbia to Seek and Treat for Optimal Prevention of HIV/AIDS (STOP HIV/AIDS). As a direct result of this work, the province has already seen a decrease in new HIV diagnoses and a reduction in HIV related morbidity and mortality.

Now, with international leaders in the AIDS response endorsing the proposed global expansion of access to antiretroviral therapy, Dr. Montaner’s efforts stand to bring about a much-needed shift in the approach to managing the HIV/AIDS pandemic around the world. By continuing to advocate for universal access to HAART, Dr. Montaner aims to help prioritize “treatment as prevention” around the globe and bring vital life-saving therapies to the low- and middle-income countries where they are needed most urgently.

Other recipients of this year’s award are: