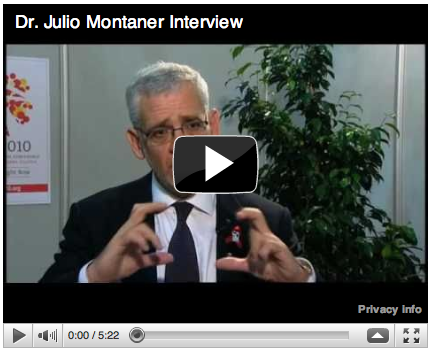 Many of the National Institute on Drug Abuse (NIDA)'s top grantees are studying the link between substance abuse and HIV/AIDS. A select few were interviewed at the XVIII International AIDS Society conference in Vienna, Austria in July 2010.

Hear Dr. Julio Montaner ---Director of the BC Centre for Excellence in HIV/AIDS, NIDA grantee and past president of the International AIDS Society--- discuss his research into treatment as prevention.

Treatment as Prevention:
Under the leadership of Dr. Julio Montaner the BC-CfE has found a compelling body of research from around the world that, taken together, shows that expanded HAART access could play an important role in reducing the transmission of HIV in a regional population and at the same time reduce HIV/AIDS-related morbidity and mortality.

More about NIDA:
NIDA's mission is to lead the Nation in bringing the power of science to bear on drug abuse and addiction.

More about the XVIII International AIDS Conference:
The International AIDS Conference is a biennial conference that is the premier gathering for those working in the field of HIV, as well as policy makers, persons living with HIV and other individuals committed to ending the pandemic. It is a chance to assess where we are, evaluate recent scientific developments and lessons learnt, and collectively chart a course forward.