Thousands came together in Vienna in a march, rally, and concert for HIV and human rights. The event took place on Day 3 of the XVIII International AIDS Conference. 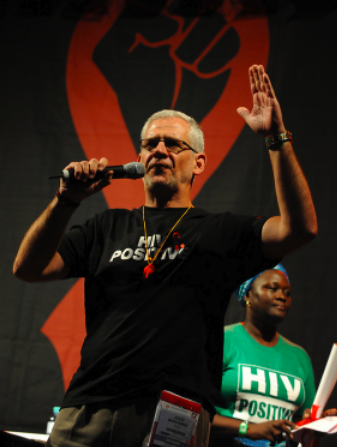 BC-CfE director, conference chair and president of the International AIDS Society, Dr. Julio Montaner led the march through the streets of Vienna past Austrian government buildings to the famous Heldenplatz (Hero's Square).

Joining him at the front of the pack were Michel Sidibé, executive director of UNAIDS, and Michel Kazatchkine, head of the Global Fund to Fight Aids, Tuberculosis and Malaria.  Sidibé addressed the rally at the end of the march, thanking the thousands of marchers for their commitment to being “a force for change… a force for human rights.”

Delegates marched to demand more respect for human rights in the fight against HIV and to call attention to the need for more funding globally to support all aspects of a comprehensive response to AIDS.

Singer, songwriter, and UNAIDS Goodwill Ambassador, Annie Lennox gave a live preformance to wrap up the event. Lennox has been a long-time advocate for human rights in the global AIDS response. In an Agence France-Presse article, she is reported as saying "funding the fight against AIDS 'should not be something charitable...we need to say: 'this is about human rights,'". Lennox recently launched her SING Campaign, which aims to give voice to women and children living with HIV and AIDS.