Thousands came together in Vienna last night in a march, rally, and concert for HIV and human rights. The event took place on Day 3 of the XVIII International AIDS Conference.

BC-CfE director, conference chair and president of the International AIDS Society, Dr. Julio Montaner led the march through the streets of Vienna past Austrian government buildings to the famous Heldenplatz (Hero's Square). 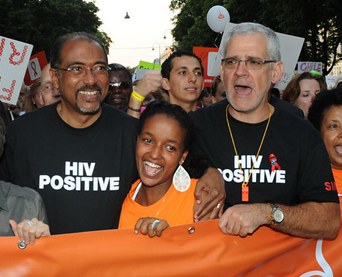 Joining him at the front of the pack were Michel Sidibé, executive director of UNAIDS, and Michel Kazatchkine, head of the Global Fund to Fight Aids, Tuberculosis and Malaria. Sidibé addressed the rally at the end of the march, thanking the thousands of marchers for their commitment to being “a force for change… a force for human rights.”

Delegates marched to demand more respect for human rights in the fight against HIV and to call attention to the need for more funding globally to support all aspects of a comprehensive response to AIDS.

Singer, songwriter, and UNAIDS Goodwill Ambassador, Annie Lennox gave a live preformance to wrap up the event. Lennox has been a long-time advocate for human rights in the global AIDS response. In an Agence France-Presse article, she is reported as saying "funding the fight against AIDS 'should not be something charitable...we need to say: 'this is about human rights,'". Lennox recently launched her SING Campaign, which aims to give voice to women and children living with HIV and AIDS. 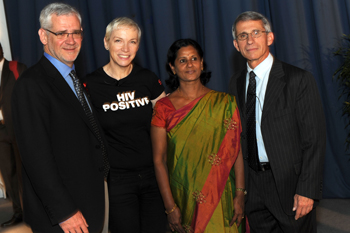 The Women, Girls and HIV Investigator Prize is offered jointly by the IAS-Industry Liaison Forum and UNAIDS, and supported by the International Centre for Research on Women and the International Community of Women Living with HIV/AIDS. The US$2,000 prize is awarded to an investigator from a low-income or middle-income country whose abstract demonstrates excellence in research and/or practice that addresses women, girls and gender issues related to HIV and AIDS. This prize serves to highlight the challenges faced by women and girls in this epidemic and to encourage investigators from low- and middle-income countries to pursue research in this area.

The Lancet Series: Global HIV Epidemic Among People Who Use Drugs

Following on the heels of The Lancet themed issue on HIV prevention launched at AIDS 2008, The Lancet has commissioned a series on the global HIV epidemic among people who use drugs. The series consists of seven original state-of-the-art reviews, and a number of invited commentaries.

Following the principle of "nothing about us without us," each paper includes the voices of people who use drugs : these include community participants and leaders from China, Ukraine, Thailand, Malaysia, and the USA. Invited commentaries include the Vienna Declaration, a call to decriminalize people who use drugs, and commentaries from high profile authors including Nora Volkow, the Director of the National Institute of Drug Abuse on biomedical research in addiction, state officials from Mexico will discuss their country's alternative approaches to the war on drugs, and commentaries on women and drug use, alcohol and HIV transmission in Africa, and HIV prevention in prisons by a group from Iran.

The series captures a 'sea change' in terms of the international response to HIV prevention and treatment among people who use drugs, a growing segment of the global HIV and AIDS epidemic that has been underappreciated for too long.

The event was co-chaired by: Richard Horton and Chris Beyer

We must remain committed to the goal of reaching universal access to HIV prevention, treatment and care, and recognize that, post-2010, the best path forward must be informed by lessons learned from the successes and the failures of the efforts undertaken to date.