According to a new study by BC Centre, treating more HIV patients will check the spread of the virus and save almost $1 billion in health-care costs in British Columbia, over 30 years.

Health authorities and the BC Centre will run this program in collaboration. It aims to expand access to drugs among sex trade workers, injection drug users and men who have sex with men.

It is called highly active antiretroviral therapy, or HAART, which is one of its kinds entailing economic benefits too. As per the study, if 75% of all eligible B. C. residents were treated with the drug treatment, an amount of US$900 million would be saved.

Increasing highly active antiretroviral therapy (HAART) treatment for people with HIV/AIDS will provide significant cost savings over a relatively short period of time, according to a formal economic analysis.

Led by researchers at the BC Centre for Excellence in HIV/AIDS (BC-CfE) at Providence Health Care and the University of British Columbia (UBC), the analysis of HAART coverage in British Columbia, is the first comprehensive economic evaluation of the net benefit of HAART in the province.

published on July 7, 2010 in The Canadian Press

VANCOUVER - Treating more HIV patients will prevent the spread of the virus and save almost $1 billion in health-care costs in British Columbia over 30 years, a new study suggests.

The BC Centre for Excellence in AIDS/HIV study is the first to gauge such economic benefits of treating more people with highly active antiretroviral therapy, or HAART.

The study says about US$900 million would be saved if 75 per cent of all eligible B.C. residents were treated with the drug regimen, up from the current 50 per cent of infected patients. 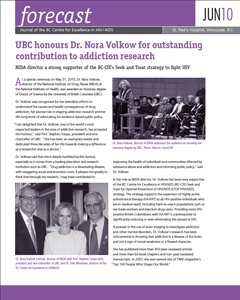 Dr. Volkow was recognized for her relentless efforts to understand the causes and health consequences of drug addiction, her pivotal role in shaping addiction research and her life-long work of advocating for evidence-based public policy.

“I am delighted that Dr. Volkow, one of the world’s most respected leaders in the area of addiction research, has accepted this honour,” said Prof. Stephen Toope, president and vicechancellor of UBC. “She has been an exemplary leader and dedicated three decades of her life towards making a difference as a researcher and as a doctor.”

Dr. Volkow said that she is deeply humbled by this honour, especially as it comes from a leading education and research institution such as UBC. “Drug addiction is a devastating disease, with staggering social and economic costs. It pleases me greatly to think that through my research, I may have contributed to NIDA director a strong supporter of the BC-CfE’s Seek and Treat strategy to fight HIV improving the health of individuals and communities affected by substance abuse and addiction and informing public policy,” said Dr. Volkow.

In her role as NIDA director, Dr. Volkow has been very supportive of the BC Centre for Excellence in HIV/AIDS (BC-CfE) Seek and Treat for Optimal Prevention of HIV/AIDS (STOP HIV/AIDS) strategy. The strategy supports the expansion of highly active antiretroviral therapy (HAART) to all HIV-positive individuals who are in medical need, including hard-to-reach populations such as sex trade workers and injection drug users. Providing more HIVpositive British Columbians with HAART is a prerequisite to significantly reducing or even eliminating the spread of HIV.

A pioneer in the use of brain imaging to investigate addiction and other mental disorders, Dr. Volkow’s research has been instrumental in showing that addiction is a disease of the brain, and not a sign of moral weakness or a flawed character.

She has published more than 450 peer-reviewed articles and more than 60 book chapters and non-peer reviewed manuscripts. In 2007, she was named one of TIME magazine’s “Top 100 People Who Shape Our World.”

A new study from the B.C. Centre for Excellence in HIV/AIDS and the University of B.C. shows HIV treatment significantly reduces new HIV infections, saves thousands of lives and averts billions of dollars in costs.

The centre's director, Dr. Julio Montaner, said the study shows that more than 90 per cent of people who were infected with HIV were less likely to transmit the disease if they were receiving treatment for it.

He also said the study proves treatment provides a huge cost saving to the health care system in the long term.

"At a global level people take the view if you don't invest in treatment you'll save money but this study shows [treatment] is an investment," said Montaner.   More >>

Researchers from the British Columbia Center for Excellence in HIV/AIDS and the University of British Columbia say their mathematical modeling study of the 2008 International AIDS Society-USA therapy guidelines for treatment of the human immunodeficiency virus shows full implementation would lead to more people entering treatment, an increase in lives saved, billions of dollars in costs averted and a significant decrease in infections.   More >> 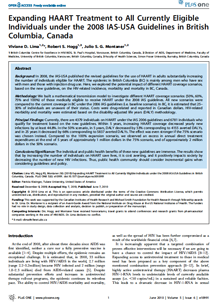 Background: In 2008, the IAS-USA published the revised guidelines for the use of HAART in adults substantially increasing the number of individuals eligible for HAART. The epidemic in British Columbia (BC) is mainly among men who have sex with men and those with injection drug use. Here, we explored the potential impact of different HAART coverage scenarios, based on the new guidelines, on the HIV-related incidence, morbidity and mortality in BC, Canada.

Methodology: We built a mathematical transmission model to investigate different HAART coverage scenarios (50%, 60%, 75% and 100%) of those medically eligible to receive HAART under the 2008 IAS guidelines. All new scenarios were compared to the current coverage in BC under the 2006 IAS guidelines (i.e. baseline scenario). In BC, it is estimated that 25– 30% of individuals are unaware of their status. Costs were drug-related and reported in Canadian dollars. HIV-related morbidity and mortality were estimated based on the disability-adjusted life years (DALY) methodology.

Conclusions/Significance: The individual and public health benefits of these new guidelines are immense. The results show that by increasing the number of individuals on HAART save lives, it is cost averting, and it positively impacts society by decreasing the number of new HIV infections. Thus, public health community should consider incremental gains when considering guidelines and policy.

June, 2010 - The Pharmacovigilance Program at the BC Centre for Excellence in HIV/AIDS has received four reports of suspected drug interaction between ritonavir and triamcinolone acetonide intra-articular injection leading to symptoms of corticosteroid excess (Cushingoid features) and adrenal suppression. The affected patients were HIV-infected adults whose antiretroviral therapy included a protease inhibitor boosted with ritonavir 100-200 mg daily. All patients received one or more injections of triamcinolone acetonide 40-80 mg into shoulder or knee joints. Adrenal suppression (morning serum cortisol <28 nmol/L, reference range 175-685 nmol/L) was diagnosed four to 14 weeks after the first triamcinolone acetonide injection.

B.C. women with HIV are more than twice as likely as women in Quebec or Ontario to experience "viral load rebound" which means their medication stops killing the virus, and their disease rebounds to a higher level than before they went on the drugs.

In B.C., 33.6 per cent of women in a national study experienced this condition, versus 13.3 per cent in Ontario and 13.5 per cent in Quebec.

Louise Binder, chairperson of the Canadian Treatment Action Council, was diagnosed with HIV 17 years ago after getting infected by her husband. She experienced viral load rebound seven years ago.  More >>

HIV-positive women in British Columbia are more likely than those in other provinces to also have hepatitis C or be injection drug users, according to a study released yesterday.

The report, put together by researchers with the Canadian Observational Cohort, found that HIV risk factors for women vary significantly among provinces.

“Defining the differences in the characteristics of HIV-positive women among provinces is the first step in developing targeted treatment, prevention, access and management programs,” said Dr. Mona Loutfy, co-principal investigator.

Robert Hogg, researcher at the B.C. Centre for Excellence in HIV/AIDS, added that the data is key to helping understand how and why Canadian women are being infected with HIV.  More >>