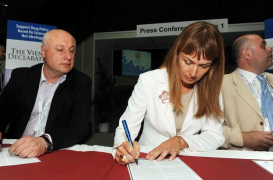 The Vienna Declaration is a scientific statement seeking to improve community health and safety by calling for the incorporation of scientific evidence into illicit drug policies. More than 12,580 people - including Nobel laureates and leaders in science, medicine and public policy - have signed the declaration since it was launched three weeks ago. The Declaration was published in the Lancet medical journal to coincide with AIDS 2010.

"Georgia supports evidence- based policy in our efforts to protect community health and safety," said Roelofs, the wife of Mikheil Saakashvili, President of Georgia. "Our signatures on the Vienna Declaration reinforce our recognition that harm reduction can provide numerous benefits and highlights the need to design policies that align with emerging science."

Georgia is moving forward with activities that are intended to ensure safer and healthier communities across the country by taking action in three priority areas: prevention, treatment and enforcement... More>>