The XVIII International AIDS Conference opened this evening with an engaging  address by the BC-CfE's own Dr. Julio Montaner. In his welcoming remarks, Dr. Montaner called out the G8 for keeping HIV/AIDS off the table at the recent G8 meeting in Toronto, Ontario, and provided messages of encouragment and optimism to all engaged in the global AIDS response.

He also provided an update on the groundbreaking work underway in British Columbia and elsewhere around the world utilizing the concept of "treatment as prevention," and applauded UNAIDS' new vision of Treatment 2.0. In closing, Dr. Montaner asked everyone to sign the Vienna Declaration and join more than 10,000 signatories, including past presidents and Nobel laureates, calling for evidence-based drug policies

Other presenters in this session included: 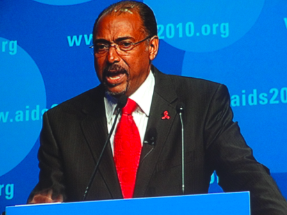 In his speech at the Opening Session of the XVIII International AIDS Conference this Sunday in Vienna, Michel Sidibé specifically cited the ground-breaking work coming out of British Columbia as evidence supporting UNAIDS' push for an international HIV treatment revolution known as Treatment 2.0.

The Opening Press Conference of the XVIII International AIDS Conference featured the following speakers speaking later at the Opening Session.

Dr. Julio Montaner, BC-CfE Director, Conference Chair and President of the International AIDS Society opened the press conference by providing introduction to the conference and an update on recent research in support of treatment as prevention.

UNAIDS - Towards a paradigm shift in HIV treatment and prevention

At this defining moment—reshaping the AIDS response is a necessity.

UNAIDS and the International AIDS Society set the tone for the AIDS 2010 Conference at an event today that challenged and encouraged delegates to call for and join a movement to reshape the AIDS response to reach universal access to HIV prevention, treatment, care and support.

Delegates brought their ideas to this interactive Town Hall event and engaged with leaders in the AIDS response. The event was hosted by James Chau, News Anchor, China Central Television; UNAIDS National Goodwill Ambassador for China.